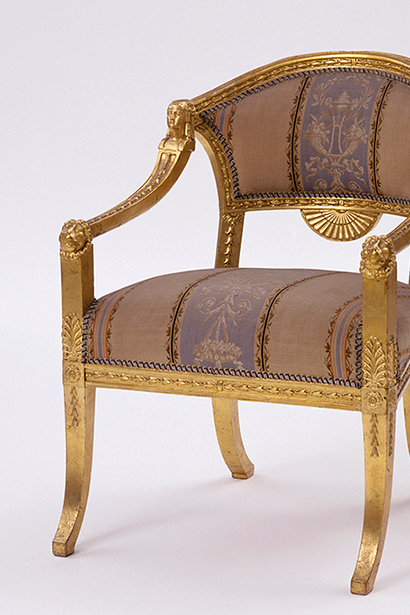 THE ROYAL PALACE OF STOCKHOLM

An inscription on the inner side of this chair from the Royal Collections reveals its significance to the Bernadotte dynasty. King Oskar II's memoirs tell us what happened:

As usual, Queen Dowager Desideria had taken a late carriage trip and intended to visit the Opera. Once in the royal box, she began to feel ill and returned. When she got back to the palace, she was unable to walk up the stairs and instead was carried up in a chair to her daughter-in-law Josefina's apartment. Josefina came rushing up and embraced her elderly mother-in-law, but there was nothing that she or anyone else could do.

Queen Desideria died after a short time sitting in this very chair, if we are to believe the inscription: "On 17 December 1860. At half past 10 in the evening, the dear mother-in-law of the Swedish Royal Court passed away peacefully."