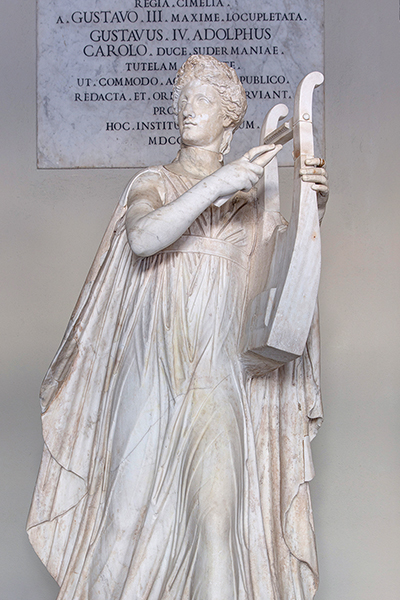 Behold, Apollo! Here is the God of singing and music, often depicted playing a cithara - the small harp-like instrument you see in his left hand. And as was the case with all the Olympian gods and goddesses, Apollo was a god of many other things including medicine, light and the sun.

On his head, Apollo wears a wreath of laurel, a plant specifically associated with him. If you look closely, you can see that his head is heavily reworked. It was probably originally made for a larger statue and then reduced to fit the smaller body of this statue. The re-carving has caused an obvious distortion of his head: note the too wide face, bulgy mouth and oversized eyes.

As the patron god of music and poetry, Apollo was the leader of the Muses and the director of their choir. At the drinking parties held on Olympus, Apollo accompanied the Muses with his cithara. The nine Muses were sister goddesses who both protected and inspired literature, art and science. On Apollo’s left and right side in Gustav III's Museum of Antiquities at the Royal Palace, you can see all of them.

A VIRTUAL TOUR 360°
Experience the Larger Stone Gallery at the Museum of Antiquities in 360° here at the web site.

This archive shows nine of the sculptures on show at Gustav III's Museum of Antiquities, the Royal Palace. Many more are on display in the museum. Gustav III purchased several of the museum's sculptures during a journey to Italy at the end of the 1700s.