A witness of her time: Hedvig Elisabeth Charlotta

Throughout her adult life, Hedvig Elisabeth Charlotta found herself close to the centre of power. First as a duchess and the sister-in-law of King Gustav III, and then as queen. She kept a diary all this time.

"I do not write for my contemporaries but for those who come after me, and I will take sufficient precautions…"

… she wrote in April 1792, following the assassination of King Gustav III. And she was true to her words. In October 1817, Hedvig Elisabeth Charlotta locked away her diary in a chest and issued orders that it should be kept secret for 50 years.

Hedvig Elisabeth Charlotta of Holstein-Gottorp was just 15 years old when she came to Sweden to marry Duke Karl, the younger brother of King Gustav III. A beautiful, lively, humorous and talented young woman, she enjoyed singing, playing music, drawing and dancing, and was extremely sociable. In other words, she was exactly the kind of person with whom King Gustav III liked to surround himself.

"She laughs and jokes all day. She is joy itself!"

"She laughs and jokes all day," wrote the besotted Lord High Chancellor Fredrik Sparre. "She is joy itself. Her greatest pleasure is to make jokes and find humour in situations."

In connection with her wedding in 1774, King Gustav III commissioned one of the leading architects of the time, Jean Eric Rehn, to renovate the Baroque Rosersberg Palace for the duke and duchess. Her diary tells us that she generally ate breakfast at around ten o'clock at Rosersberg, before going to her room, perhaps to write letters or her diary, or going for a ride in the park. At three o'clock it was time for dinner, after which they would converse until five o'clock, when Chamberlain Axel Otto Mörner would read aloud from a book. Tea was then served, after which the duchess and her attendants would take a carriage trip. Supper was served at ten o'clock, and at a quarter past eleven everyone would retire to their own rooms.

"I fear that sorrow and worry will undermine my health, and I will be forced to seek happiness in another world."

The duke and duchess mostly lived separately. Karl had a long line of lovers. Outwardly, Hedvig Elisabeth Charlotta appeared to accept this with courage. However, at the age of 22, she wrote in her diary: "I fear that sorrow and worry will undermine my health, and I will be forced to seek happiness in another world." She later suffered further heartbreak – a stillborn daughter and a son who was born prematurely.

In 1789, a constitutional change led to conflicts with the nobility, and a number of court officials were imprisoned. Hedvig Elisabeth Charlotta and Sofia Albertina initiated a strike, whereby the ladies of the court began to decline the King's invitations. A contemporary commentator, Bishop Olof Wallquist, described the situation as follows:

"Princess Sophia Albertina remained at home and only spent time at the Palace with the Duchess. The court could not be held, for the King expected that no ladies would appear. In any case, all the women of the court were dissatisfied and angry. A Bourse assembly was held, which the King also attended, but there were only enough women for two quadrilles, and the assembly was actually more like a Riksdag club."

"They say that he is incredibly angry with us…"

Hedvig Elisabeth writes about the action against the king in her diary, with barely concealed satisfaction:

"They say that he is incredibly angry with us due to our consistent absence from the performances and our decision not to socialise."

The adopted son – a stellar appointment

Tensions between the nobility and the king remained, and in 1792 the king was assassinated. His son Gustav IV Adolf became king but was deposed in 1809, and Karl and Hedvig Elisabeth Charlotta were crowned king and queen. However, since they were childless, the country still lacked an heir to the throne. The Swedish upper classes therefore made a stellar appointment: the French marshal Jean Baptiste Bernadotte.

Describing her first meeting with the future crown prince, she wrote:

"Then the crown prince came to visit me. After the customary polite phrases and assurances of devotion and respect for the king, for the entire royal family and for me in particular, he said: 'Madame, I understand all too well the feelings that my arrival must arouse in you, but please remember that the first king was a solider, who was favoured by success!' 'Let us not speak of it now,' I replied. 'You have won your promotion based on your own merits, and that is worth more than being born into a position.'" 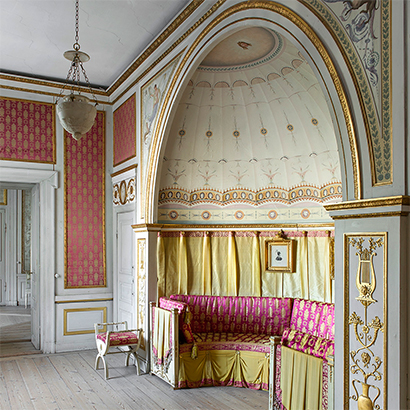 King Karl (XIII) and Queen Hedvig Elisabeth Charlotta lived at Rosersberg Palace. It was here that she wrote her secret diary. The Conversation Room at Rosersberg was decorated for the duchess. Photo: Alexis Daflos/Royalpalaces.se 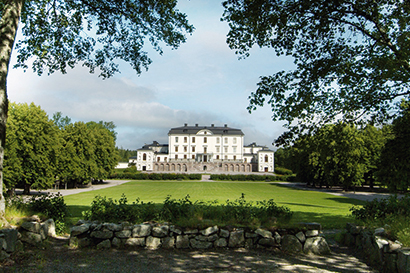 King Gustav III had the leading architect of the time decorate Rosersberg Palace for the duke and duchess. Her diary describes her life at Rosersberg. Photo: Dick Norberg/Royalpalaces.se 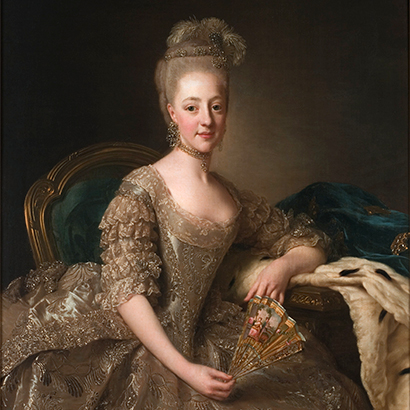 Hedvig Elisabeth Charlotta (1759-1818) found herself at the centre of events during a dramatic period. Her candid observations are regarded as an important source of information about this period. Photo: Nationalmuseum

Duchess and Queen (1809-1818) Hedvig Elisabeth Charlotta was a contemporary observer. Her diary notes from 1775 to 1817 are an important source of knowledge about this period. Subsequent research shows that she was also a political player.

Charlotta's diary notes consist of more than 7,000 closely written pages. Almost a century after her death, her diary was translated and published in book form.