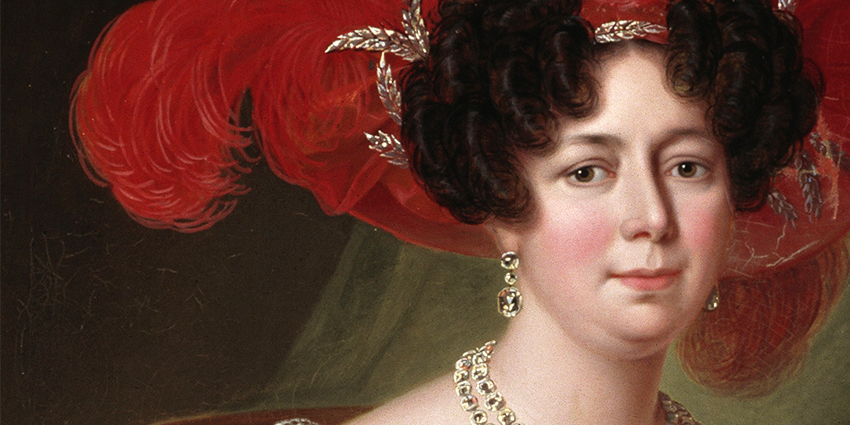 Desideria – queen from a distance

Desideria, Sweden's new queen, had always been at the very centre of world events. She now found life at the Swedish court dull. However, at Rosersberg Palace she was able to relax during the summer.

Bernhardine Eugénie Désirée Clary was the daughter of a wealthy silk maker in Marseille, and enjoyed a peaceful existence until the French Revolution's Reign of Terror. In the midst of this chaos, Désirée became engaged to a promising young officer by the name of Napoleon Bonaparte, and her sister Julie was engaged to his brother Joseph. Désirée suffered a serious shock when the news reached her that Napoleon had married another woman, and wrote sadly:

"Do not completely forget Eugénie, and pity her fate."

Napoleon could never truly forget Désirée. Throughout his life, including as emperor, he continued to hold his watchful hand over her. When she later married the officer Jean Baptiste Bernadotte, he protected him, too. Désirée was one of very people who did not fear Napoleon. She was equally unafraid of her strong-willed husband.

Things went well for Jean Baptiste Bernadotte. He was promoted to the rank of marshal, and was eventually rewarded with a small principality of his own, Pontecorvo. One day, he was offered a kingdom. And so Désirée became Crown Princess of Sweden and took the Swedish name Desideria. Desideria found Swedish court life rigid and dull, and her husband worked all the time. The queen also found the climate unsuitable, and in June 1811, just two months after arriving in Sweden, she returned alone to France "for the sake of her health".

Desideria did not combe back to Sweden until twelve years later, in June 1823. She brought with her the sixteen-year-old Josefina of Leuchtenberg, whom her son Oskar (I) had chosen as his wife.

From 1823 onwards, Desideria settled in Sweden permanently. One place, at least, where she seems to have been happy was Rosersberg Palace. Queen Desideria and King Karl XIV Johan spent part of the summer here, and life at the summer palace was less formal. At Rosersberg, they entertained themselves with theatre and music. The king also liked to play billiards, and the billiards table remains at the palace to this day. However, he disliked playing cards.

The palace was self-sufficient in terms of fish, game, fruit, berries and vegetables. The king's favourite porcini mushrooms were also grown here. Desideria ensured that the palace's pantry was stocked with olive oil, artichokes, chocolate, pistachios and Roquefort cheese.

Desideria could be charming and sociable. The English minister Bloomfield visited Rosersberg in 1824, and described how "pleasant and amiable" the queen was. He wrote about how the evenings ended with coffee, billiards and companionship in the library, which had newspapers from the whole of Europe. The piano was played, the king recited Molière, the ladies of the court did needlework and the queen read.

When King Karl XIV Johan died in 1844, Queen Desideria was granted Rosersberg as her jointure. She brought mementos here, and hung portraits of her relatives on the walls. Comfortable footstools were placed alongside her favourite sofa. In short, she made the place feel homely and personal with simple means.

The queen dowager was very fond of animals. She had a Maltese dog that she liked to pamper, and everyday she fed her chickens, swans, geese and ducks, which she treated almost like pets. Those who worked at the court described her as friendly and generous.

Desideria often had plans to travel to Paris, but she never made the journey due to her fear of crossing the sea – a fear that grew worse with time.

Late to the final performance

All her life, the queen found it hard to be punctual. On 17 December 1860, she arrived late as usual at the Royal Swedish Opera. She only made it in time to see the curtain fall on Calderón's 'Life Is a Dream'. A short while later, the woman who had found herself at the heart of world history was dead. The performance was over.

"On 17 December 1860, at half past 10 in the evening, the dear mother-in-law of the Swedish Royal Court passed away peacefully."

Top image: Desideria, 1781–1860, Queen of Sweden and Norway. Portrait by Fredric Westin, painted in 1830. From Nationalmuseum's collection. The image has been cropped. 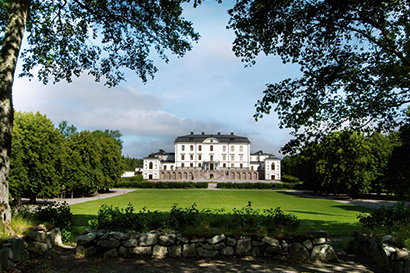 Where time has stood still. Rosersberg Palace was Queen Desideria's jointure. She was the last member of royalty to live at the palace, and the Swedish Empire style décor has remained largely unchanged since her time. Photo: Dick Norberg 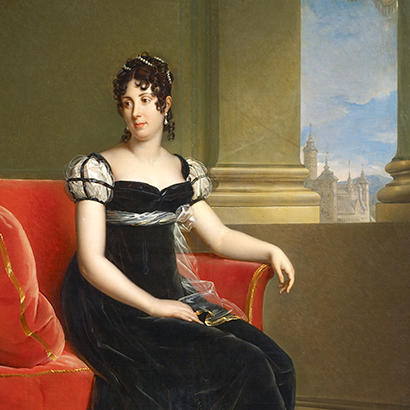 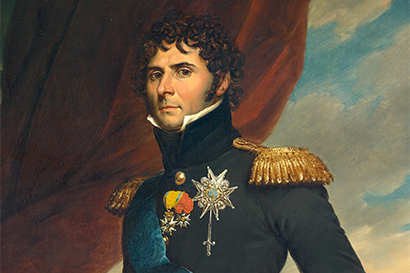 Desideria was named Queen of Sweden and Norway when King Karl XIV Johan ascended to the throne in 1818, but remained in Paris. The couple stayed in contact over the years by letter, and the king thereby received political information about events in Europe. Portrait of Karl XIV Johan as Crown Prince, painted by François Gerard in 1811. Photo: Alexis Daflos 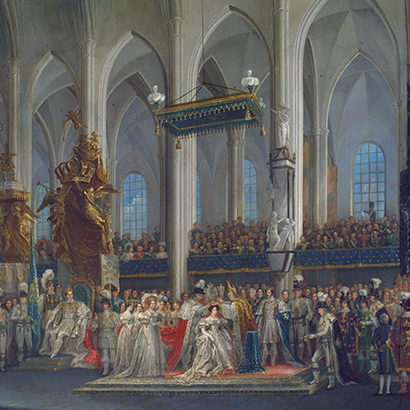 Desideria was eventually crowned Queen of Sweden on 21 August 1829 at Stockholm Cathedral. Karl Johan had allowed her coronation to be delayed for a long time, probably because it conflicted with her Catholic faith. The painting (cropped) is by Fredric Westin, from the Royal Collections. 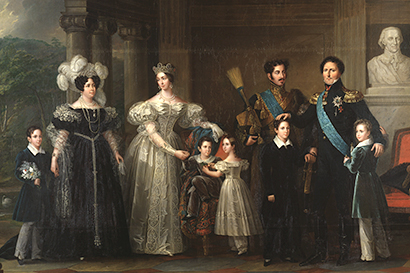 After an absence of twelve years, Desideria now settled permanently in Sweden. She is thought to have particularly appreciated the informal life at Rosersberg Palace. Bernadotte family portrait by Fredric Westin, 1929. Photo: Nationalmuseum 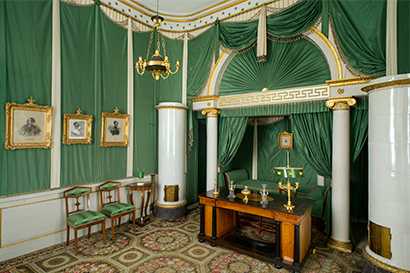 The grand interiors at Rosersberg Palace remain largely untouched since Desideria's time there. The image shows Karl XIV Johan's bedchamber. The queen is thought to have liked silk, which is perhaps not surprising considering that she was the daughter of a silk merchant. Photo: Alexis Daflos 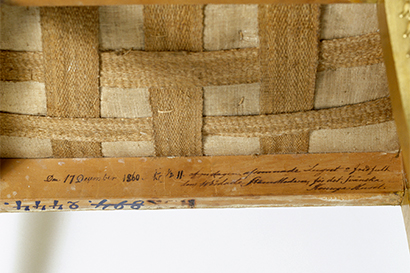 "On 17 December 1860, at half past 10 in the evening, the dear mother-in-law of the Swedish Royal Court passed away peacefully." Thus read the inscription on the drawing room chair at the Royal Palace on which the queen is said to have died. Following her visit to the Royal Swedish Opera, where she began to feel ill, she was unable to climb the stairs at the palace and was instead carried up in a chair to her daughter-in-law Josefina's apartment, where – after a short while – she died in this very chair. If, that is, the inscription is to be believed. Find out more about the chair via the link on the right. Photo: Alexis Daflos

Opens in new window.. You can find out more about the portraits via your mobile phone using our audioguide:

FIND OUT MORE ABOUT

The chair on which she is said to have died

External link, opens in new window.
Queens in our archive

One hundred years have now passed since the sudden death of our current King's grandmother. Who was this woman, who was so modern for her...

For two days, Ulriksdal's beautiful Palace Park will be filled with exquisite crafts and delicious delicacies from local suppliers.

'No prisoner shall escape, and no enemy shall enter.' This is the theme for this year's autumn holidays at Gripsholm Castle. You can go...