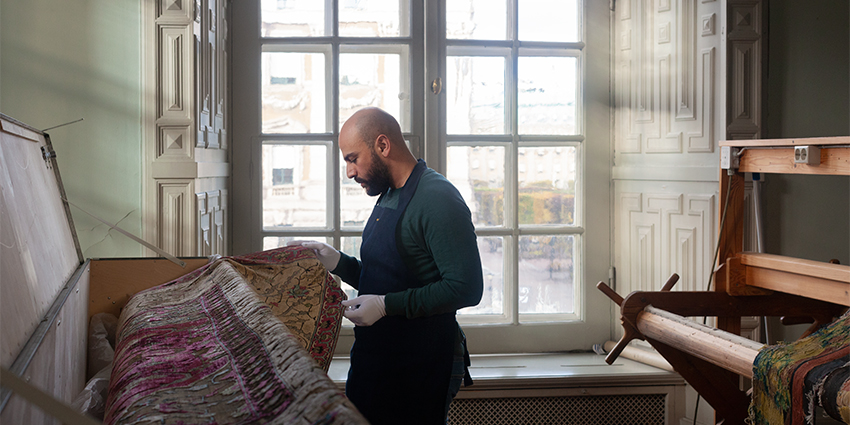 The Royal Collections have grown over a period of more than 400 years, from the time of King Gustav Vasa to the present day. They include everything from humble utensils to decorative pieces of international significance.

Some of these objects date back to the time of the former Tre Kronor Palace, while others are from the 50 years when the Royal Family lived at the Wrangel Palace on Riddarholmen. Most, however, were acquired since the Royal Family moved into the present Royal Palace in the 18th century.

In order to furnish the new palace, large quantities of furniture were commissioned including sets of many dozens of chairs – from simple seats to ornate gilded armchairs and stools for audiences and other ceremonies. The furniture was mostly manufactured in Stockholm. Other pieces were imported, including bronze items such as chandeliers, wall sconces and candelabra, as well as various clocks.

Some of the most opulent objects were gifts from foreign heads of state and individuals. One such gift is the magnificent silver throne

Opens in new window., which was given to Queen Kristina in connection with her coronation in 1650.

Other examples include extravagant gifts received by King Gustav III and his brother Duke Fredrik Adolf from the French Kings Louis XV and Louis XVI, such as series of woven tapestries from France's Les Gobelins workshops and porcelain from Sèvres.

The most recent objects in the Royal Collections can be seen in King Carl XVI Gustaf's Jubilee Room at the Royal Palace, with gifts to mark The King's 25th jubilee in 1998.

The regalia – the principal symbols of the monarchy – are state property and under the Instructions promulgated in 1594 are entrusted to the Chamber of Receipts, today called Kammarkollegium, the Legal, Financial and Administrative Services Agency. From the beginning of the 1900s until 1970, the regalia were stored in the Riksbank (the Swedish Central Bank). From 1970 the regalia have been on exhibition for the public in the Treasury

Opens in new window. at the Royal Palace.

The oldest objects in the Treasury are King Gustav Vasa's two Swords of State. The oldest crown is that belonging to King Erik XIV. The Treasury is also home to several crowns belonging to Swedish Princes and Princesses, as well as the silver baptismal font which was commissioned in 1696 and is used at royal christenings.

The Bernadotte Library at the Royal Palace contains the Bernadotte dynasty's books, from King Karl XIV Johan to King Gustaf VI Adolf and their queens. It also includes the Bernadotte photograph collection, as well as maps, illustrations, congratulatory addresses and sheet music.

Department of the Royal Collections

The Department of the Royal Collections has employees with various different skills, including curators, librarians, textile, furniture and metal conservators, gilders, furniture-makers, upholsterers and seamstresses. The collections mainly belong to the Swedish state, and are placed at the disposal of the reigning monarch.

Explore styles through the ages – visit the royal palaces

The royal palaces date from different periods, and their architecture and interiors reflect the styles of different eras. Gripsholm Castle boasts excellent examples from the Renaissance and Vasa periods. Sweden's Age of Greatness is clearly expressed at Drottningholm Palace, while Stockholm's Royal Palace features excellent examples of Tessin Gold Baroque, which was lightened up by Hårleman's Rococo in the 18th century.

Towards the end of the century, Gustavian style became prevalent before culminating in Neoclassicism around the turn of the century, and then evolving into Empire style – or Karl Johan style, as we call it here in Sweden – in the early 19th century. Excellent examples of Gustavian style and Neoclassicism can be seen at Gustav III's Pavilion at Haga, and Rosendal Palace on Royal Djurgården has Sweden's best preserved Empire-style interiors. For details of opening hours, see Our sites

Top image: The "hunting rug" is a rarity from the Royal Collections. It is one of the world's finest oriental rugs, woven using silk in Persia in the mid-16th century, and the best preserved example from the period. It is stored in the tapestry storage of the Department of the Royal Collections, and is only displayed on special occasions. Photo: Emma Fredriksson/Royalpalaces.se

Works of art, furniture, paintings, textiles – most of the collections can be seen when visiting the royal palaces.

See a selection from the collections in the Archive menu

One hundred years have now passed since the sudden death of our current King's grandmother. Who was this woman, who was so modern for her...

For two days, Ulriksdal's beautiful Palace Park will be filled with exquisite crafts and delicious delicacies from local suppliers.

'No prisoner shall escape, and no enemy shall enter.' This is the theme for this year's autumn holidays at Gripsholm Castle. You can go...