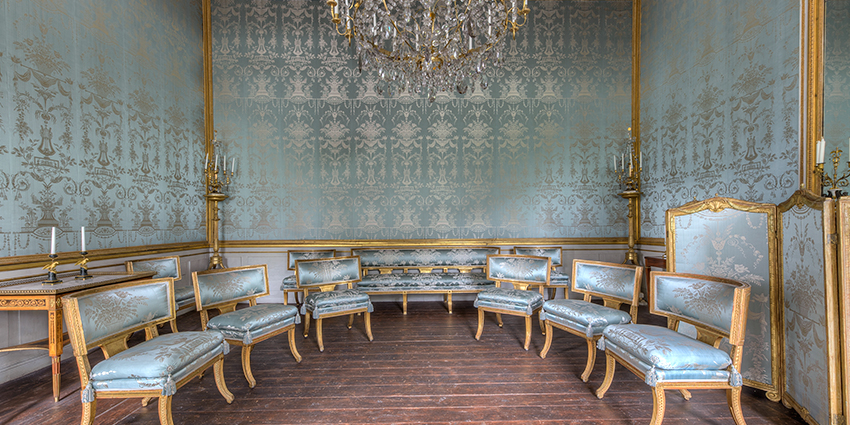 A history of style – Gustavian

In Sweden, the transition from Rococo to Gustavian style was a gradual development which, at the end of the century, culminated in Neoclassicism. The Gustavian period coincides with the reigns of King Gustav III and his son, King Gustav IV Adolf.

The styles of different eras have often been named after key contemporary figures, most often monarchs, which is why the same styles may have different names in different European countries. For example, the Louis Seize style (Louis XVI, 1754–93) in late 18th century France corresponds to what we in Sweden call Gustavian (Gustav III, 1771–92, Gustav IV Adolf, 1778–1809).

A king with a sense of style

Just like his mother, Queen Lovisa Ulrika, King Gustav III had a keen sense of style and aesthetics. His education and his refined tastes left their mark on 18th century Sweden. Today, the Gustavian style has become almost synonymous with 'Swedishness', and much of the functionalism and simplicity in Sweden's 20th century ethos of restraint can be traced back to Gustavian influences.

If the Rococo was vegetative, then the Gustavian style was architectural, based on the ideals of antiquity. The curved lines of the Rococo were straightened out and silhouettes became symmetrical, with rectangles and ovals being particularly popular. The fronts of furniture became flat and smooth, with tapering, slender legs, sometimes fluted like classical columns. Compared with the sweeping Rococo, style, the late 18th century was characterised by tight restraint.

The inlaid elements of veneered furnishings took on new expressions, before being abandoned entirely towards the end of the period. Dark, uniformly coloured mahogany was replaced with more decorative features in the form of mouldings and fittings in gilded bronze or brass, which also borrowed their form from architectural styles. Festoons and laurel wreaths are common motifs, alongside the classical cymatium. In Sweden, the transition from Rococo to Gustavian and Late Gustavian style was a gradual development which, at the end of the century, culminated in Neoclassicism.

The transition from Rococo to Gustavian

Jean-Eric Rehn's role in the transition from Rococo to what we in Sweden call Gustavian was of great significance for Swedish stylistic developments at the time.

Jean-Erik Rehn (1717–1793) originally travelled to Paris to train as a copperplate engraver, but with his versatile talent and having come to the attention of Hårleman, he was recalled home to join the team of craftsmen working on the interiors of the Royal Palace. Today, Rehn's breadth and versatility would have earned him the title of multi-designer. He designed everything from porcelain, silver, wallpapers and fabrics, to architecture, fixtures and fittings, and wrought iron banisters.

Queen Lovisa Ulrika noted Rehn's talent, and in 1755 she paid for him to travel to France and Italy to study. Rehn was accompanied by the painter Johan Pasch. The trip lasted for sixteen months, six of which were spent in Rome. On returning home, Rehn was appointed Surveyor to the Royal Court and Professor of the Academy in 1757. It was during this trip that Rehn encountered the latest continental fashions.

Festoons attached with 'buttons' are seen as typical of Rehn's style, as are wooden panels and lining with a central oblong broken by a circular form. These shapes can be seen in many interior details from the time.

King Gustav III's journey to Italy and France in 1783–84 is usually seen as the point when Sweden made the transition to what we call the Late Gustavian style, influenced by the Neoclassical trends that the king encountered on the continent.

On returning home, he had his pavilion at Haga renovated in the very latest fashions. Louis Masreliez (1748–1810) had spent many years studying art and painting in France and Italy. He became highly skilled as what we would now call a designer. Together with his brother, the sculptor Jean-Baptiste Masreliez, he created many of Sweden's finest Neoclassical interiors.

Great master furniture builders such as Haupt and Iwersson worked during the Gustavian era, with Swedish furniture-making reaching its technical peak at the end of the century. 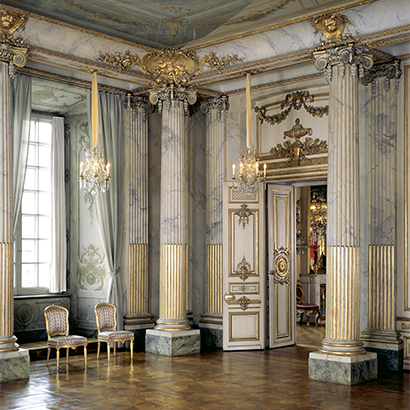 The Pillared Hall at the Royal Palace is home to chairs with shapes highlighting the transition between two different eras. Here, elements of Gustavian style can also be seen on the door panels and lintels. Photo: Alexis Daflos/Royalpalaces.se 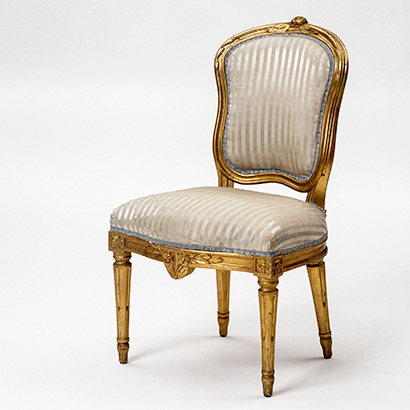 The Gustavian chairs in the Pillared Hall were made by master furniture builder Erik Öhrmark, and show the transition between different eras. The fiddle-shaped back and the curved edging carry over from Rococo style, and are combined with Gustavian legs. Öhrmark became a master furniture builder in 1777, and followed stylistic developments through to the end of the century. Photo: Alexis Daflos/Royalpalaces.se 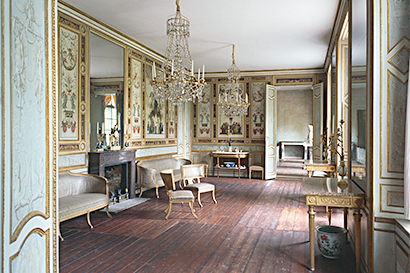 Gustav III's Pavilion is a highlight of Swedish art history, and its interiors – among the finest in the country – date from the late 18th century. King Gustav III commissioned a leading artist, Louis Masreliez, whose work on the pavilion made him one of the greatest interior trendsetters of the time. Photo: Jens Lindhe 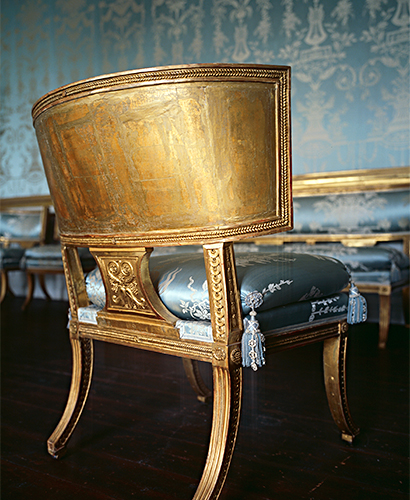 Louis Masreliez made his mark on Swedish furniture history when he designed the sulla chair for Gustav III's Pavilion. At the time, both the shape and the technical execution were entirely new. This piece was produced by chair maker Erik Öhrmark. Photo: Jens Lindhe 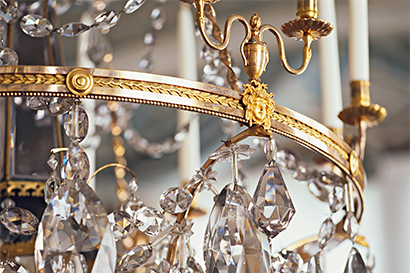 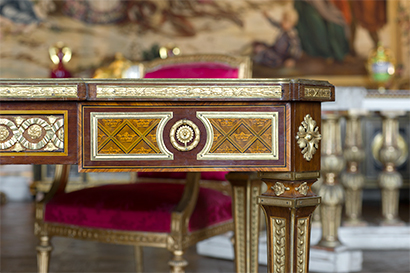 Great master furniture builders such as Haupt and Iwersson worked during the Gustavian era. The image shows King Gustav III's desk, built by Georg Haupt in 1778, which can now be seen in King Gustav III's State Bedchamber at the Royal Palace. Photo: Alexis Daflos/Royalpalaces.se

GUSTAVIAN STYLE AT THE ROYAL PALACES

Find out more about the Haga chandeliers (in Swedish)

TYPICAL FEATURES OF THE GUSTAVIAN STYLE

The excavations of the ancient cities of Herculaneum and Pompeii, which were buried when Mount Vesuvius erupted in 79 AD, brought new influences during the latter half of the 18th century. Classical forms emerged once again, and become the new stylistic ideal. Austere lines replaced curvaceous Rococo forms. Chair legs became straighter, and the inlays of veneered furniture were produced on flat surfaces. Towards the end of the period, furniture was veneered with smooth mahogany, often with decorative brass profiles and cockbeading (bevelled brass profiles to protect veneer edges). Small drop-shaped details, or guttae, were borrowed from architecture and incorporated into furniture. Brass castors were added to the slender, narrow legs of lighter, moveable furniture, and handles were often shaped like laurel wreaths. This was a restrained, symmetrical, balanced and austere style.