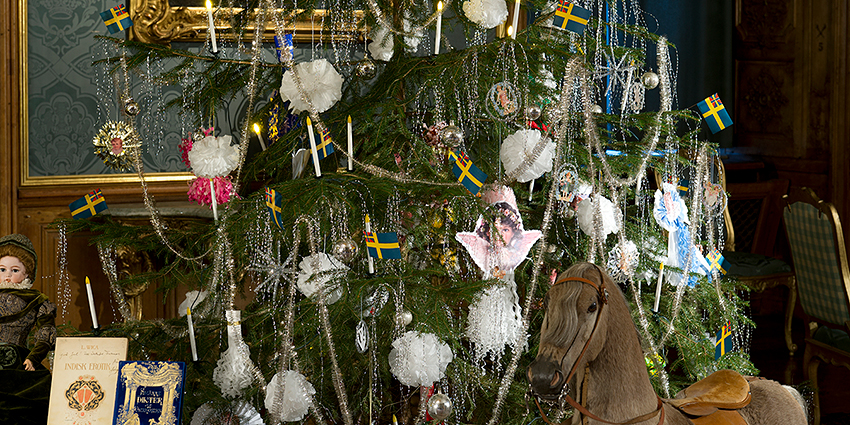 King Oskar II continued to develop the traditions established during the reign of his brother, King Karl XV. Some were retained, while others disappeared. The number of trees increased, a Christmas morning service was held at St Klara's Church, and the days between Christmas and New Year were spent at Drottningholm.

A few days before Christmas, the trees were dressed by the royal family themselves. To begin with, this took place in Queen Lovisa Ulrika's Dining Hall, where four trees were enough: one large, two small, and an even smaller one for the children. However, as the number of participants and the scale of the festivities grew, more trees were needed and the Vita Havet Assembly Rooms were used. The king's grandchildren Gustaf (VI) Adolf and Wilhelm liked to take part in the preparations, and climbed onto the highest steps – terrifying the ladies of the court. The king had been a sailor in his youth and was used to climbing masts. He was confident that they could manage, as long as they held on tightly. For his own part, the king contented himself with telling anecdotes and spreading good cheer with his witty jokes. The trees were decorated with candles, sweets, bunting and bells to ring Christmas in.

Just as before, the royal family gave gifts to all their employees. The court officials received their gifts during grand Christmas celebrations with the royal family, but there were so many of them that not all the gifts could be wrapped. The presents were set out on a gift table for each recipient.

"He was probably never aware that there was a great rush to the department store to exchange gifts on the day after Boxing Day."

On Christmas Eve, the guests gathered outside the assembly rooms. Queen Sofia gave the signal by ringing a silver bell, after which the doors were opened and the participants made their way to their gift tables. The presents could be porcelain, silverware, clothing, ornaments, toys, artworks or antique furniture. There were also gifts made by the artistic members of the royal family. Between the gift tables, there were tailor's dummies wearing dresses from Augusta Lundin as Christmas presents for the ladies of the court.

The king then went round and helped to demonstrate the gifts, ensuring that everyone had received what they wanted. As Prince Wilhelm put it bluntly in his memoirs: "He was probably never aware that there was a great rush to the department store to exchange gifts on the day after Boxing Day."

The table was adorned with a roasted suckling pig with an apple in its mouth. The menu varied from year to year, but always included lye fish and fresh asparagus.

Christmas dinner in the Pillared Hall

After the Christmas presents had been handed out, the royal family withdrew to their private apartments for a time of worship, at which King Oskar played Christmas hymns on his harmonium. After the end of the service, during which the court officials had kept to their own rooms, they came together in the Pillared Hall for Christmas dinner. The table was adorned with a roasted suckling pig with an apple in its mouth. The menu varied from year to year, but always included lye fish and fresh asparagus.

Sweets were given out for dessert in carefully considered 'models' together with humorous verses about the attendees. For example, in Christmas 1887 aide-de-camp Gustaf Uggla received his sweets in a model doll with the wording "number ten". This was a reference to the fact that he had fathered his ninth child that year. Maid of Honour Thomasine Stierncrona, who walked a lot, received hers in a realistically painted mildewy boot.

The queen: "Now drink, then!"
The king drinks, after which he says: "Per Mattsson!"

The dinner concluded with a tradition dating back to a Christmas present King Karl XV had bought at an auction for his brother: the Drott Horn, a silver-mounted horn that had previously belonged to the future King Karl XIII. King Oskar was very fond of the horn and had it on his command ship, the HMS Drott, hence the name. The horn was filled with champagne and passed from person to person, each of whom had to recite a phrase before drinking from it. Oskar began by turning to the queen with the raised horn:

The horn was then passed on to the queen, and so on. It was particularly amusing if the person who tried to drink from the twisted horn turned it the wrong way and showered themselves with champagne.

The festive period at Drottningholm

A Christmas morning service was held at St Klara's Church, a tradition dating from the time when Prince Oskar and his family lived at the Prince Royal's Palace and were members of the congregation.

The days between Christmas and New Year were usually spent at Drottningholm, where all manner of winter activities were carried out such as sledging, sleigh riding, skating and hunting.

Around New Year, the king and queen held a children's party at which the children could take all the edible decorations from the trees. However, the princes and princesses were not included, as they were deemed to have had enough treats already. Games were then played, which King Oskar himself liked to take part in. Favourite games included musical chairs and a version of follow-my-leader which Oskar called 'Mufti fait comme ci'. 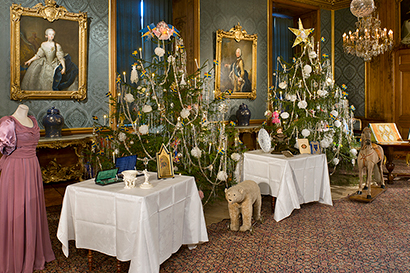 To begin with, trees were decorated in Queen Lovisa Ulrika's Dining Hall. The image is from a 2012 exhibition about historic Christmas celebrations. Photo: Alexis Daflos/Royalpalaces.se 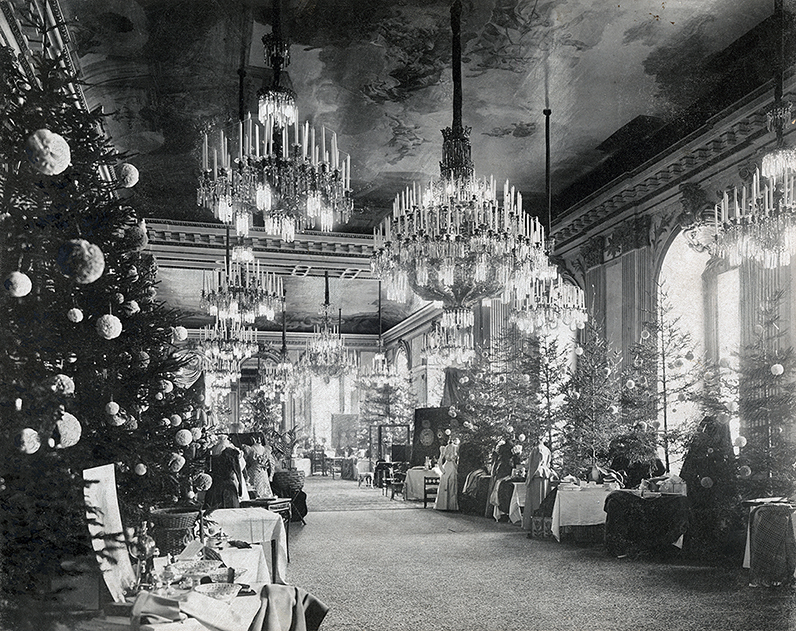 More attendees meant more trees, and so the Christmas celebrations were moved to the Vita Havet Assembly Rooms at the Royal Palace. This photo is from 1897. Photographer: von V. Wolfenstein. From the archive of the Bernadotte Library. 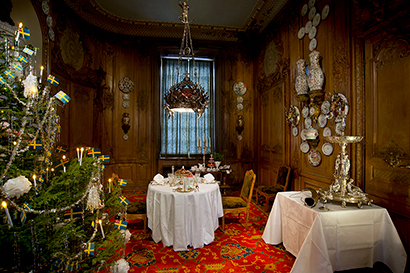 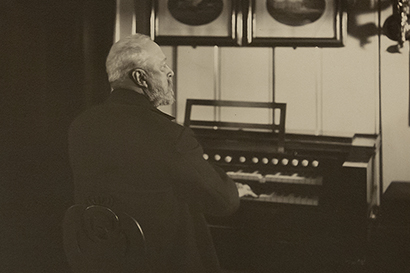 After the Christmas presents had been handed out, the royal family withdrew for a time of worship, during which King Oskar played Christmas hymns on his harmonium. Here, The King is seen at the organ on board the HMS Drott in summer 1900. From the archive of the Bernadotte Library. 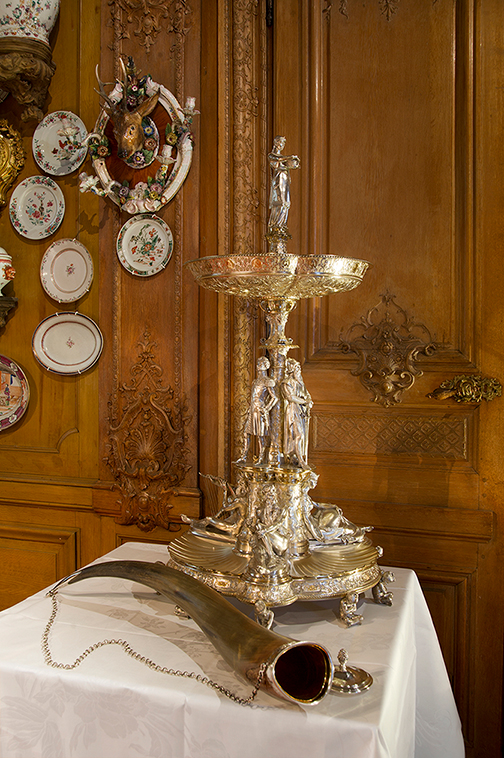 The Drott Horn, seen lying on the table, was filled with champagne and passed from person to person, each of whom had to recite a phrase. Photo: Alexis Daflos/Royalpalaces.se 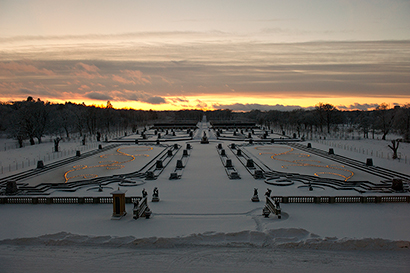 The days between Christmas and New Year were spent at Drottningholm, with winter activities such as sledging, sleigh riding, skating and hunting. Photo: Alexis Daflos/Royalpalaces.se