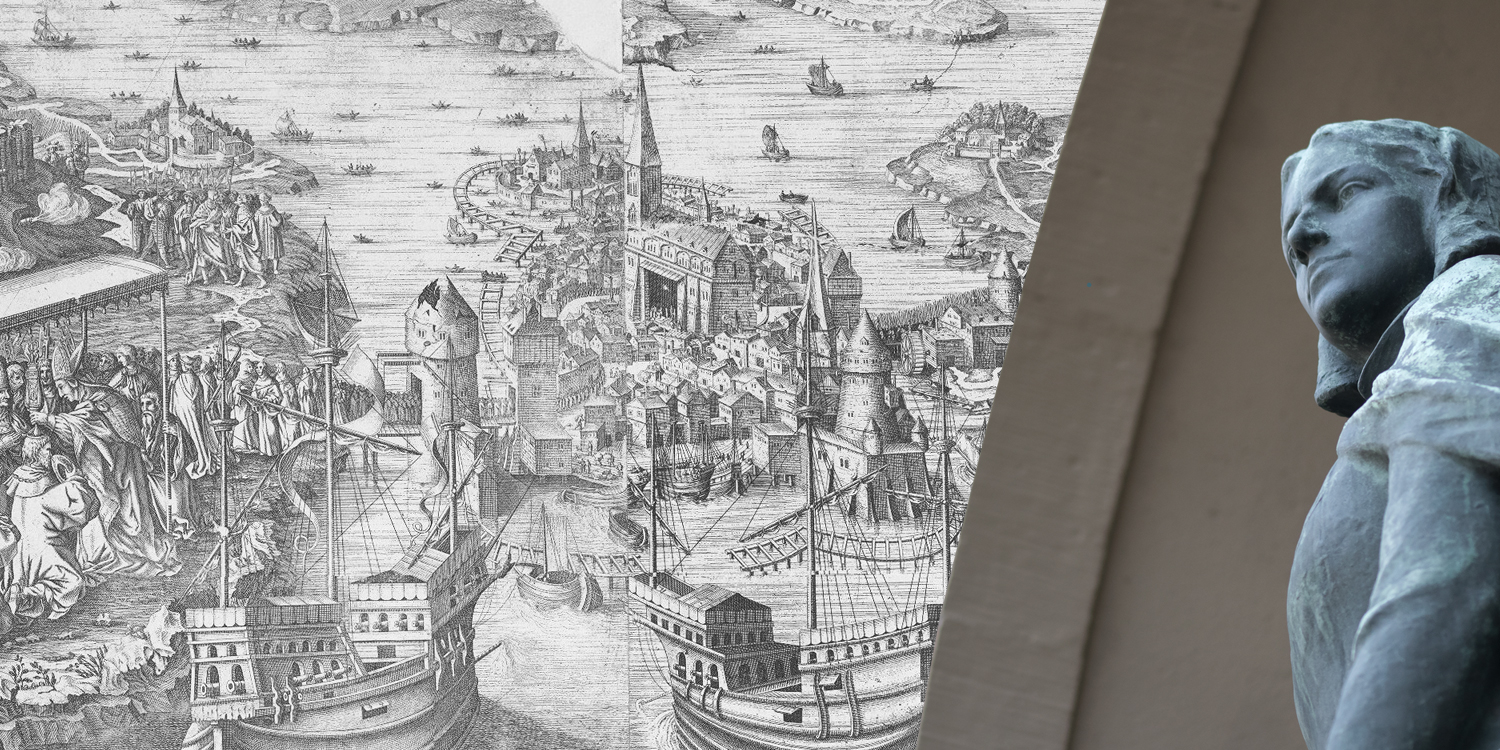 Kristina Gyllenstierna and the Stockholm Bloodbath

When state councillor Sten Sture the Younger died, it was his wife Kristina Gyllenstierna who led the resistance against the union. She defended the country's most important stronghold: Stockholm.

Kristina was the daughter of state councillor Nils Eriksson Gyllenstierna and Sigrid Eskilsdotter Banér. In 1511, at the age of seventeen, she married 18-year-old Sten Sture the Younger who became regent of Sweden the following year.

Their marriage lasted almost ten years until his death, and resulted in six children: three girls and three boys. Despite giving birth to so many children, Kristina managed to be involved in governing together with her husband. In winter 1520, Sten Sture was killed in battle against Denmark. Following his death, Kristina took over and led the resistance against the union and King Kristian II of Denmark. She and a number of supporters defended Stockholm, the country's most important stronghold.

In May 1520, Kristian and his troops reached Stockholm and began to lay siege to the city. The palace was defended until 5 September that year, but capitulated following the promise of an amnesty. The capitulation letter offered a generous amnesty and full forgiveness for all past actions.

However, immediately after his coronation in November 1520, King Kristian went back on his word. During a meeting at the palace, in the presence of Kristina and the Swedish nobility, the doors were suddenly closed. Guards were put in position, and the king accused them of having deposed Archbishop Trolle. Deposing the archbishop was a crime against the church, for which the king declared that he was unable to grant an amnesty. King Kristian decided that the only way to punish the troublemakers was to put them to death.

On 8–9 November 1520, just days after King Kristian II's coronation celebrations at the palace, a hundred people were executed on Stortorget in Stockholm's Gamla Stan – a public mass execution that has come to be known as the Stockholm Bloodbath.

Several of Kristina's close relatives were among those put to death. Her husband's remains were also exhumed and burnt at the stake. Legend has it that the king then summoned Kristina and asked her whether she would prefer to be burned at the stake or buried alive. She fell to the ground in terror.

However, neither of these threatened fates was carried out, and she was imprisoned at the palace until August 1521. She was then taken to Denmark and held at Copenhagen's Christiansborg Palace until 1524. She was freed in 1524, and returned to Sweden.

Kristina's found herself in a difficult position during the reign of King Gustav Vasa. Those who opposed Gustav Vasa wanted to use her popularity to sow the seeds of dissent. However, this division came to an end when, in accordance with the king's wishes, Kristina married state councillor Johan Turesson. She subsequently devoted herself primarily to private matters and no longer constituted any threat to the royal power. Kristina died at Hörningsholm in 1559, and is buried at Trosa Country Church.

Today, her likeness stands guard over the Royal Palace. Since 1912, a sculpture of Kristina Gyllenstierna – created in 1897 by Theodor Lundberg – has stood in the Outer Courtyard. The sculpture was paid for by the Society for the Permanent Defence of Stockholm, and was Sweden's first official female statue.

Top image: The Bloodbath Plate was commissioned by King Gustav Vasa in 1524, and depicts the events of the Stockholm Bloodbath. The image shows a section of the view of Stockholm. The original was a woodcut produced by Kort Steinkamp and Hans Kruse, which was subsequently lost. A depiction (the copperplate) was commissioned by Magnus De la Gardie in 1676, and created by Dionysius Padt-Brugge. Photograph of the copperplate from the National Library of Sweden. 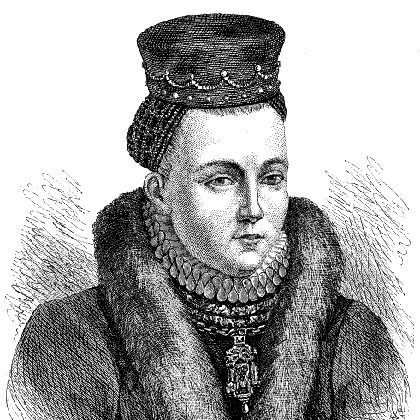 Kristina Gyllenstierna, the mother of six children, was involved in governing together with her husband, state councillor Sten Sture the Younger. This sketch (not authentic) by Emil Behrens was published in the Swedish Family Journal in around 1880. 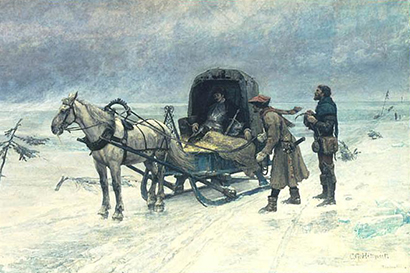 Sten Sture took control of a country in conflict. When Danish troops crossed the border in January 1520, Sten Sture was fatally wounded in battle. He died of his injuries en route home to Stockholm. The painting of Sten Sture's death on the ice of Lake Mälaren is by Karl Gustaf Hellqvist. Photo: Nationalmuseum 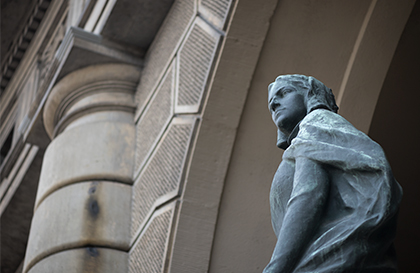 After her husband's death, Kristina defended Stockholm and the palace against King Kristian II's troops for more than seven months. Kristina and her supporters surrendered on 5 September 1520 when an amnesty was promised, although this promise was subsequently broken. Photo: Lisa Raihle Rehbäck/Royalpalaces.se 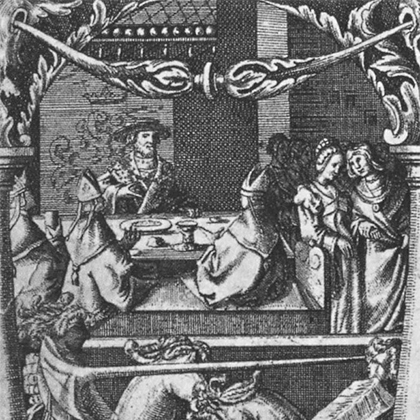 In addition to the view in the top image, the copperplate of the Stockholm Bloodbath also depicts eight scenes from the sequence of events. Here is the first scene, portraying the royal banquet at the Tre Kronor Palace. Photo: The National Library of Sweden 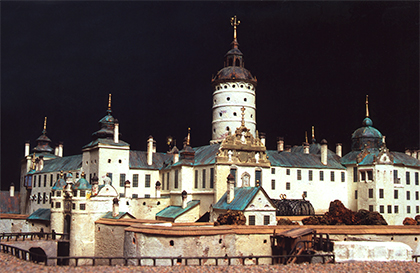 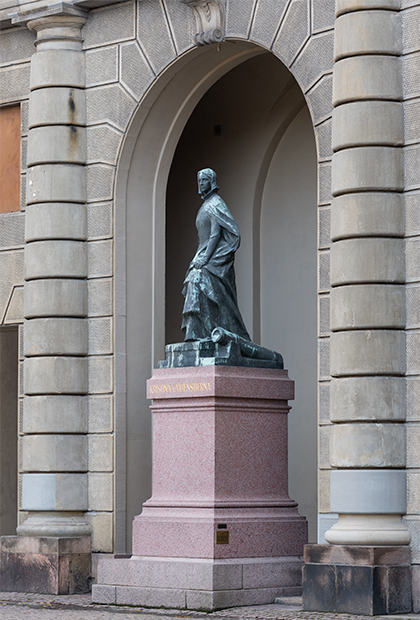 Kristina Gyllenstierna watches over the palace. Sweden's first official statue of a woman was raised in her honour in the Outer Courtyard of the palace. Photo: Lisa Raihle Rehbäck/Royalpalaces.se

FIND OUT MORE ABOUT

The history of the Royal Palace

Swedish monarchs from Vasa to Bernadotte

The Thinking Hand is an annual scholarship competition for young draftsmen. The nominated entries are ususal exhibited at the Gustav II...