The wedding of Princess Madeleine and Mr Christopher O'Neill took place on 8 June 2013 in the Royal Chapel at the Royal Palace.

The couple had met in New York, where The Princess was working for The Queen's World Childhood Foundation. Their engagement was announced on 25 October 2012.

The dress's waistline is pleated, and the broad skirt opens into narrow vertical folds and ends in a four metre long train. The upper section of the dress with its short arms is also covered with lace, which leaves the shoulders bare and features a deep-cut back.

The veil is also silk organza, and is edged with tulle scattered with point d'esprit dots and small Chantilly lace orange blossom. The orange blossom also appeared in her hair arrangement. The Princess wore her own tiara, which was a gift from The King and Queen, edged with orange blossom on the lower edge and the traditional sprig of myrtle.

The day before the wedding, a reception was held for The Princess and Mr Christopher O'Neill at Stockholm's Grand Hôtel. Princess Madeleine wore a silk chiffon evening dress by designer Elie Saab, embroidered with natural coloured sequins (shown on the page for The Crown Princess's dress

Later on the evening of the wedding, which took place at Drottningholm Palace, The Princess wore a dress that had been previously worn by The Queen. The tulle dress with sparkling crystals and a pearl-embroidered bodice was designed by Nina Ricci, and had been worn by The Queen in 2001 for The King and Queen's silver wedding anniversary and later that same year at the Nobel festivities. Both these evening gowns were displayed as part of the exhibition.

Images: The Princess Couple arrive at Drottningholm Palace in 2013, where the wedding festivities were held following the ceremony in the Royal Chapel. Photo: Alexis Daflos/Royalpalaces.se. Other photos: Sanna Argus Tirén/Royalpalaces.se 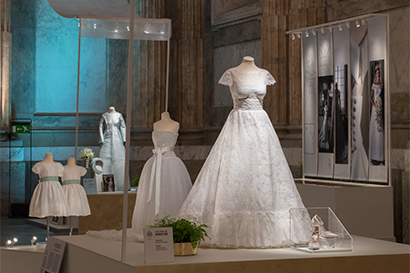 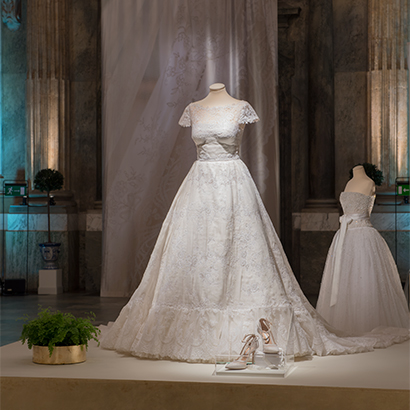 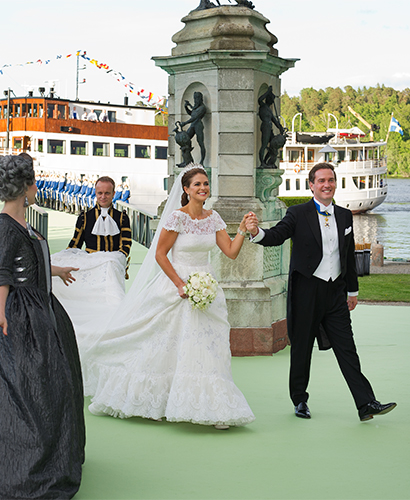 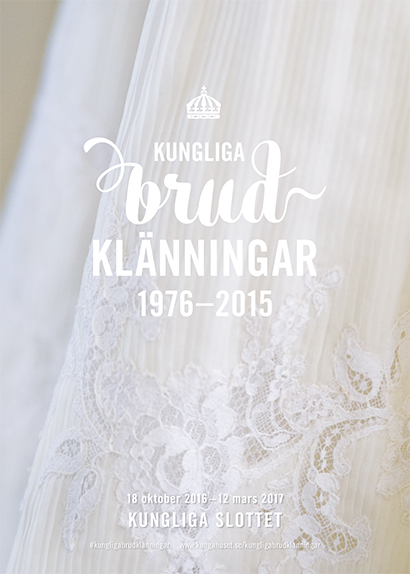 You can see Princess Madeleine's dress and accessories in the slideshow below. You can zoom in and enlarge the images via the symbols. It may take a moment for the images to load.