The name Drottningholm (literally "Queen's Island") originated in the late 16th century, when King Johan III built the first Palace on this site, for his Consort, Queen Katarina Jagellonika.

he 16th century Palace was destroyed by fire on 30th December 1661. Earlier that year the Queen Dowager, Hedvig Eleonora, had bought the Palace.

After the fire, the architect Nikodemus Tessin the Elder was commissioned by the Queen Dowager to design a new building, and in 1662 work began on the Palace, as we know it today.

At the time, Hedvig Eleonora headed the Regency for the young King Karl XI.

The Peace of Westphalia in 1648 had made Sweden one of the most powerful states in Europe, and, according to the contemporary way of looking at things, the Queen, as head of the Government of Sweden, had to be provided with a suitably impressive residence at a convenient distance from the capital.

The Palace was also given an exclusive French Baroque park, large parts of which have been preserved.

The bronze sculptures in the park are by Adrian de Vries, one of the most eminent sculptors of the Northern European Renaissance.

The collection came to Sweden as booty from Prague and from Fredriksborg Palace in Denmark.

Nicodemus Tessin the Elder created a number of interiors, which rank among the foremost in Sweden from the early Baroque of the 1660s and 1670s.

They include the staircase, the Ehrenstrahl Drawing Room and, not least, Hedvig Eleonora's State Bedchamber.

Following the death of Tessin the Elder in 1682, his son Nicodemus Tessin the Younger carried on and completed the great project. Karl XI's gallery, for example, dates from this period.

Residence of the royal ladies

Drottningholm remained the residence of the royal ladies, and in 1744 it was given as a wedding present to Princess Lovisa Ulrika of Prussia, on her marriage to the Swedish heir apparent, Adolf Fredrik.

Lovisa Ulrika's time at Drottningholm became a golden age of the arts. Some of the interiors of the Palace – Lovisa Ulrika's Green Antechamber, for example – were redecorated in a French-inspired Rococo style.

Many of the leading scientists of the age gathered at Drottningholm. Carl von Linné (Linnaeus) worked here, cataloguing the royal collections' "natural objects".

Lovisa Ulrika's library stands out as a brilliant memento of the period, which also saw the creation of the famous Drottningholm Court Theatre.

Drottningholm was purchased by the State in 1777, becoming the home of Gustav III. The great romantic "English Park" still surrounding the Baroque Palace and the French formal garden was created at this time. 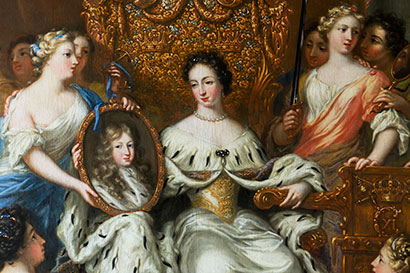 Portrait of Queen Hedvig Eleonora surrounded by allegorical figures, such as love, hope and sincerity. To the left of the queen is a portrait of her five-year-old son, King Karl XI. Photo: Alexis Daflos/Royalpalaces.se 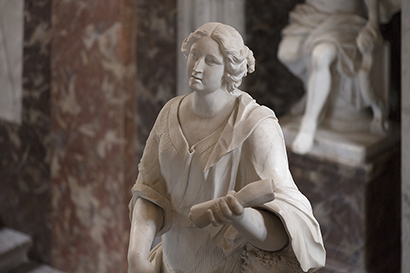 The grand staircase was created by Nicodemus Tessin the Elder, and is richly decorated with paintings, stucco work and sculptures. The image shows Polyhymnia, the Muse of sacred hymns. Photo: Lisa Raihle Rehbäck/Royalpalaces.se 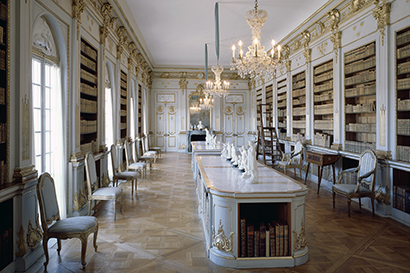 In the mid-18th century, a suite of new rooms was created to house Lovisa Ulrika's collections of art, books and natural historical objects. The current library was initially arranged as a picture gallery, but was converted into a library in the 1760s. Photo: Alexis Daflos/Royalpalaces.se 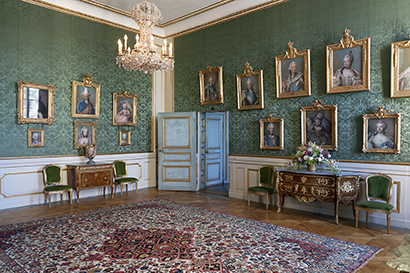 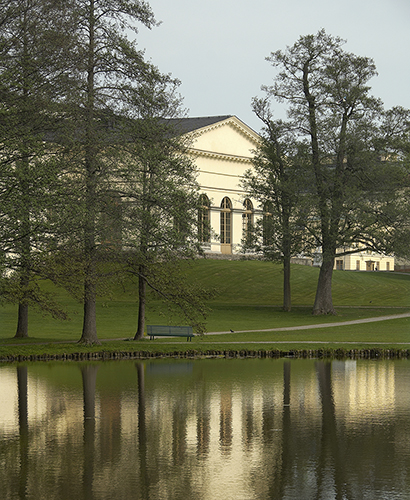 The English Park and the Palace Theatre. The Dining Salon, designed by Louis Jean Desprez, was added to the theatre in the early 1790s. The theatre then faced the park, while also providing a focal point for those walking in the park. Photo: Alexis Daflos/Royalpalaces.se

The Royal Palace and Drottningholm Palace are open for visitors, according to current recommendations. All guided tours and certain progr...