Gustav III’s pavilion at Haga is, from a European perspective, one of the most unusual royal buildings from the late 18th century. Not least because of its interior decoration.

From a European perspective Gustav III's Pavilion at Haga Park is one of the finest examples of a palace building from the late 1700s. Its magnificent interior adds to the building's importance.

Architect Olof Tempelman drew up the plans for the pavilion in 1787 and the interior design was carried out by Louis Masreliez. Masreliez had studied for several years in Italy and was closely familiar with Roman antiquity.

An interest in Roman antiquity grew during the 1780s on the continent following the famous excavation of Pompeii and Herculaneum. The new interior design trend became know as Pompeian.

Both the fashion-conscious monarch Gustav III and Louis Masreliez had visited the excavations of these ancient cities. Therefore the state room in the pavilions parade suite was decorated in Pompeian style, which with its richness of detail was a strong contrast to the more traditional fastidious interiors of the period.

This well-preserved interior can be viewed during the summer months by guided tour. 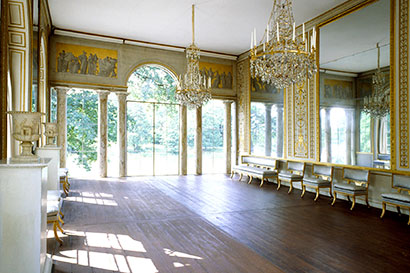 The Hall of Mirrors. The architect Olof Tempelman designed the pavilion in 1787, and the interior decoration was directed by Louis Masreliez. Photo: Alexis Daflos/Royalpalaces.se 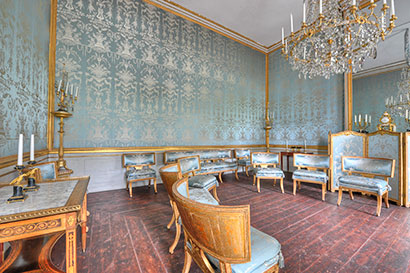 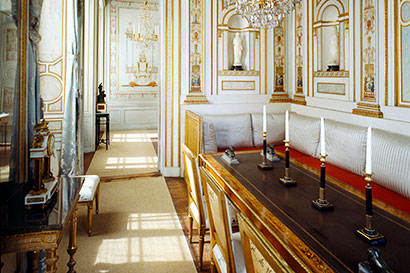 The divan. During the summer months, the interior of the pavilion can be seen during guided tours. Photo: Alexis Daflos/Royalpalaces.se

Follow along on a guided tour and hear about the Pavilion’s royal history, the history of the building itself and the preserved furnishin...

For large groups we recommend a pre-booked guided tour. Pre-booked tours can be given between June–August.

Gustav III’s pavilion at Haga is, from a European perspective, one of the most unusual royal buildings from the late 18th century. Not le...

In the summer of 1766, soon after they were married, the heir apparent, Gustav (III) and Sofia Magdalena rented Haga, a small property...

The Copper Tents houses Haga Park Museum and a café. Until 16 September it is also housing sale from the Royal Gift Shop.

A single oil painting hangs in Gustav III's Pavilion in Haga Park. It was commissioned by the king himself, when he met the artist Alexan...

The Royal Walks app offers walks in beautiful settings through several of our royal parks. The app now also includes a guide to Haga park!