The palace chapel at Rosersberg Palace is located in the southeast wing of the building, and is particularly rich in history. The chapel wing was completed in spring 1695, according to a letter written by builder Bengt Oxenstierna.

In the Baroque palace of the early 18th century, the chapel is described as having pews arranged in two blocks of fifteen pews each. Above the entry door was a gallery with two pews with violet cushions. The chapel had an altar and a pulpit. The family arms of Baron Broman and Count Taube were displayed on the walls. 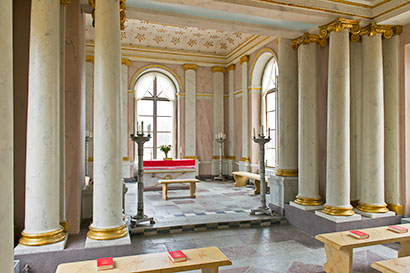 The palace chapel. The chapel was used by Queen Desideria for her catholic services.

Visiting Rosersberg Palace is like stepping back into an authentic royal environment from the turn of the 19th century. The fittings have...

The palace chapel at Rosersberg Palace is located in the southeast wing of the building, and is particularly rich in history. The chapel ...

West of the palace, towards Sigtuna Bay, is the English-style park laid out by Duke Karl (XIII). Other nearby sights include Sweden's lar...

The Juno Wing and the terrace at Rosersberg Palace are home to a summer café serving sandwiches, coffee, pastries, cakes and ice creams.

Rosersberg got its name from the mother of the estate’s founder, Lord High Treasurer Gabriel Bengtsson Oxenstierna. His mother was descen...

A very early copy of the American Declaration of Independence hangs on a wall at Rosersberg Palace. Sweden was the first state outside th...

Read more
A witness of her time: Hedvig Elisabeth Charlotta

Throughout her adult life, Hedvig Elisabeth Charlotta found herself close to the centre of power. First as a duchess and the sister-in-la...