"I was glad that you could catch a glimpse of life on Djurgården, that you could see how the majesty of the oak trees depends on people playing and moving about beneath them."

In these words Prince Eugen, writing from his home at Waldemarsudde to the poet Verner von Heidenstam, alluded to the symbiosis of man and nature that is Djurgården. For centuries Djurgården has been a place to which we come for amusement and to delight in nature.

In the 15th century king Karl Knutsson, acquired "Walmund's Island" and ever since Djurgården has been administered by the ruling monarch, for benefit and pleasure.

Djurgården was thinly populated in the 16th century and mainly used as grazing land, King Johan III turned it into a hunting park, for which in 1581 he purchased ten reindeer, later adding deer as well.

Queen Christina was a frequent visitor to Djurgården, for ballets and firework displays. Later in the 17th century, Charles XI enclosed the hunting park.

"sculling girls conveying lads and maidens out to play and disport themselves."

In the reign of Gustav III the emphasis shifted to amusement and recreation, and several taverns were established. Djurgården, though, was an inconvenient place to get to. The 16th century historian Olaus Magni describes "sculling girls conveying lads and maidens out to play and disport themselves."

Rosendal and the 19th century

Rosendal Palace was built for Karl XIV Johan (the first of the Bernadottes) between 1823 and 1827. Ever more splendid villas began to appear, such as Parkudden, Sirishov, Täcka Udden and Wicanderska Villan.

The 19th century also witnessed the birth of Cirkus, Hasselbacken, Gröna Lund, Skansen and the Nordic Museum, not forgetting many places of amusement on Djurgårdsslätten ("Djurgården Plat").

The first regular land transport links were a horse-drawn omnibus service between Gustav Adolfs Torg and Blå Porten and, starting in 1877, a tram service – also horse-drawn – from Slussen.

The Stockholm Exhibition took place here in 1897, and many of its buildings are still extant, especially round about Lejonslätten ("Lion's Plat"). 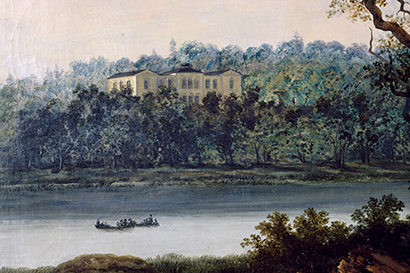 View of Rosendal in 1828, painting by J.M. Christian Etzdorf. 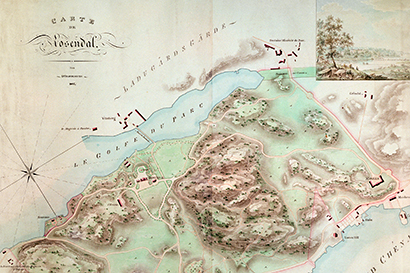 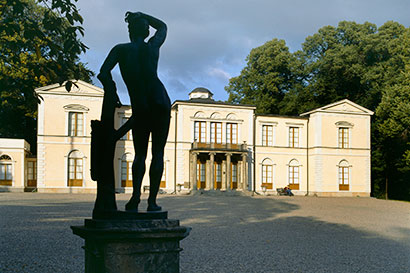 Rosendal Palace is located at South Djurgården, built in the 1820s for King Karl XIV Johan. The palace stands today largely as it did in Karl Johan's lifetime, which makes Rosendal a unique documentation of the European Empire style. Photo: Alexis Daflos/Royalpalaces.se 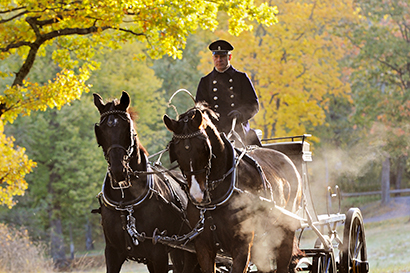 Since the 13th century, the park has been used for both business and pleasure. The photograph shows horses and a carriage from the Royal Stables during one of the daily training sessions on Djurgården. Photo: Charlotte Gawell. Click on the image below to follow on a trot (speak in Swedish). 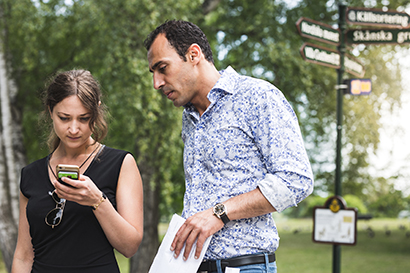 The Royal Walks app guides you along a scenic stroll through Djurgården, from Djurgården Bridge and along the waterfront to the Royal summer palace, Rosendal. Discover the culture and historical places at the south of Djurgården. The app is free to download. Photo: Julius Bohlin

The Royal Walks app can be downloaded free of charge from the App Store and Google Play. The text is in Swedish and English, and is illustrated with new and historic photos.

From early May, "The King's sheep" graze on Royal Djurgården – a tradition dating back more than a century. Grazing animals are hired in ...

The Folke Bernadotte Bridge – a bridge across Djurgårdsbrunn Bay, linking Museiparken with Rosendal – opened on September 19, 2019.

The Royal Walks app guides you along a scenic stroll through Djurgården, from Djurgården Bridge and along the waterfront to the Royal sum...