The architect of the chapel was Fredrik Wilhelm Scholander (1816-1881). The exterior design of the chapel is well adjust to the older ones; a late renaissance brick work exterior with decorative ornamentation of sandstone.

The stained glass windows were added in 1888. They depict national and regional coats of arms and royal mottos. The text on the walls honors the deeds of king Carl XIV Johan, the first monarch of the Bernadottes.

King Carl XIV Johan rests in the monumental sarcophagus in the back of the chapel (A). The sarcophagus is made out of Swedish porphyry and took some eight years to produce. The weight is some 15 tons and it was taken from the quarry of Älvdalen wintertime 1856 to nearest harbour and then shipped to Stockholm.

During the 1910's the sarcophaguses along the walls were added to the chapel. There rest four kings and their queens in the following order:

In the vault, below the chapel, the following members of the royal family rest:

Queen Désirée (1777-1860), spouse of Carl XIV Johan, rests in the sarcophagus in the middle (B). It was placed there in 1911 and made out of Swedish kolmårdsmarble. 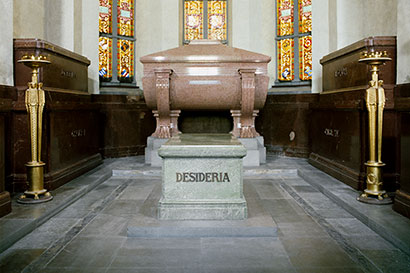 For large groups we recommend a pre-booked guided tour. The tours can be given in Swedish or English.

Discover more at The Riddarholmen Church

The current church has three naves but originally had two, with the south side aisle having been added in the mid-15th century.

With the exception of Queen Kristina, all the Swedish monarchs from King Gustav II Adolf to King Gustaf V have been laid to rest in the R...

The grave of Christ

The Riddarholmen Church's newest addition is also one of the church's oldest objects: a wooden sculpture of Christ, dating from around th...

The Royal burial church on Riddarholmen also houses the Coats of arms of deceased Seraphim Knights. The deceased Knight is honoured with ...