Ulriksdal Palace has had a chapel since 1662. At that time a chapel was built in the palace's northern wing by architect Jean de la Vallée, commissioned by Chancellor Magnus Gabriel De la Gardie.

The chapel was torn down in conjunction with Gustaf III's renovation of the palace in 1774.

The present chapel was designed by architect Fredrik Wilhelm Scholander and was built in the 1860s on a headland south of the palace. The chapel is built in Dutch new Renaissance style with certain influences from Venice.

The chapel´s interior is testimony to Karl XVs great interest in art. The ceiling is decorated with stencil paintings and several fixtures are of great interest from an art history perspective.

Today the chapel is used by the Solna Parish for mass.

The church can also be reserved by Ulriksdal Palace Administration for weddings, etc. For more information see Contact us.

Ulriksdal Palace Chapel was built between 1863-65 on the same location as the former Trinity Chapel from the 1690s.

The first palace chapel at Ulriksdal (called Jakobsdal at the time) was incorporated in 1662 into the palace´s north wing by Chancellor of the Realm Magnus Gabriel Dela Gardie's architect Jean de la Vallée.

The chapel was extremely elegant, decorated in white and gold. In conjunction with Gustav III's palace renovations the chapel was demolished in 1774.

The present chapel was designed by architect Fredrik Wilhelm Scholander, who was responsible for Karl XV's renovation of Ulriksdal.

Karl XV and Queen Lovisa, who took over Ulriksdal in the 1850s, personally participated in the design of the chapel, as well as the new interiors of the palace state rooms.

The palace exterior is designed in New Dutch Renais-sance style and inspired to some degree by Venice. The façades are playful - coloured in pink and grey - like a jewel box guarding the treasures of art inside.

The chapel has three naves, a higher centre nave and two lower side naves. The ceiling is richly decorated with stencil paintings.

The chapel's interiors and fixtures bear witness to Karl XV's great interest in art and craftsmanship.

The mid-1600s alter retable is of particular interest from an art history perspective with relic recesses in the crown and beams.

The pulpit chair from the 1500s is decorated with reliefs such as Jesus in front of Pontius Pilate and Petrus cutting off the ear of the high priest's servant. 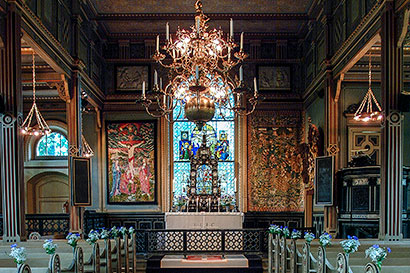 The chapel was built in 1662. Today, it is used for services by Solna Parish. 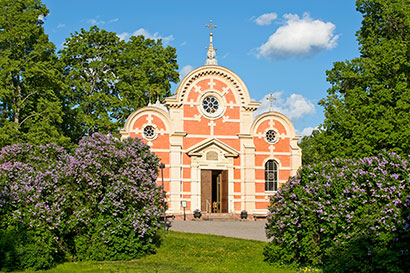 The chapel was designed in the Dutch Renaissance Revival style, with Venetian influences. Its décor shows King Karl XV's great interest in art. 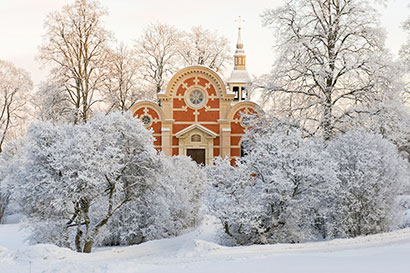 The playful pink and grey façade is like a jewel case for the art treasures of the interior. 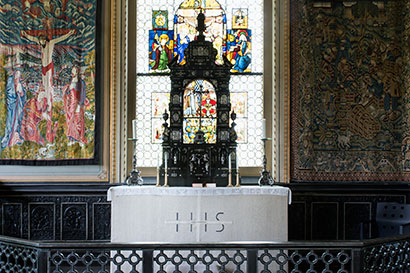 The altar in the palace chapel.