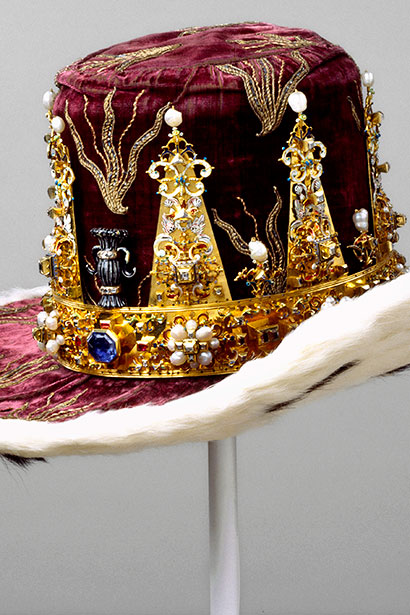 King Karl X Gustav's Crown of the Heir Apparent was made in a great hurry when Queen Kristina was due to be crowned in 1650. It was only 17 days before the coronation — that the queen reminded the council that, according to tradition, the heir to the throne wore a special costume consisting of a cloak, a crown and a cap. Jürgen Dargeman only had just over a week to make a new crown for Karl (X) Gustav.

Because time was so short, Dargeman reused the crown that had been created for Queen Kristina the Elder for King Karl IX's coronation. He applied enamel decorations from the old crown and newly-mounted stones to a newly-made plain crown ring with eight triangular points.

At the coronation, the crown is not worn directly on the head — instead, it is placed over a hat of velvet, embroidered in gold and silver and edged with ermine.

The Crown of Sweden's Heir Apparent remains virtually unchanged to this day. The only alteration of any significance was carried out for the coronation of King Gustav III in 1772, when two of the lower sceptres were replaced with black enamelled corn sheaves, the symbol of the great Vasa dynasty.

King Gustaf V was the last to wear the crown.

FACTS
Made by: Jürgen Dargeman.

Material: Gold set with pearls, diamonds, sapphires and rubies. The hat is made of velvet with gold and silver embroidery and an ermine trim.