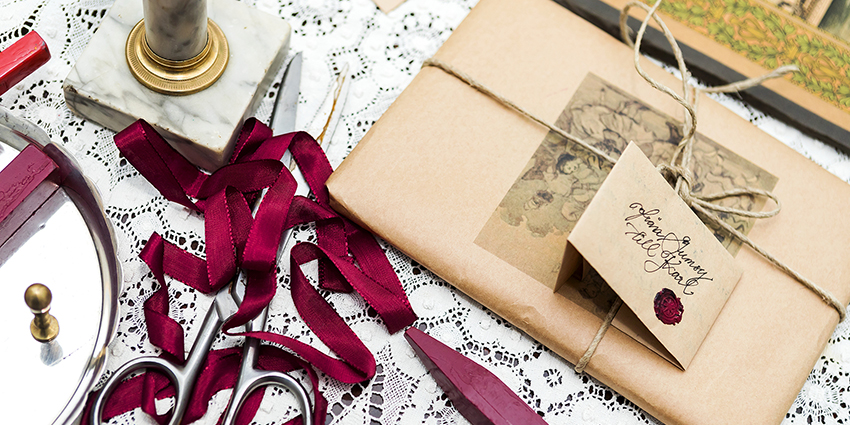 Sweden's kings have celebrated Christmas for as long as the tradition has been observed in Sweden. (The least Christmassy celebrations are thought to have been when King Birger Magnusson invited his brothers to the Nyköping Banquet at Nyköpingshus Castle on 10 December 1317, which ended in his brothers being imprisoned and starved to death.) But it was not until the 19th century that royal festive traditions began to resemble our modern Christmas celebrations.

It is not known when the first Christmas trees appeared at the Royal Palace, but the tradition was established during the reign of King Karl XV in the mid-19th century. The trees were adorned with candles and tissue paper decorations, as well as edible ornaments such as gingerbread biscuits, saffron buns and apples.

Gifts were bought from the Christmas market on Stortorget, and it was often said that the market was not really open until the king had visited.

"He enjoys being able to be generous, and takes great care to think about what would bring each person the most joy."

Wrapped with verses or portraits

The members of the royal family wrapped their presents themselves, and wrote verses on them. King Karl XV sometimes had his Lord-in-Waiting Fritz von Dardel draw pictures of the recipients instead of writing verses. Von Dardel wrote in his diary in 1863 that King Karl XV "is entirely in his element on such occasions. He enjoys being able to be generous, and takes great care to think about what would bring each person the most joy."

Traditionally, the entire royal staff – from the most senior aides to the lowliest servants – received Christmas presents from the royal family. In 1863, von Dardel also wrote that he had seen his Christmas present verse in advance, and complained that it was impossible to interpret. Unfortunately, his subsequent diary entries do not tell us what he received. However, you can try to guess for yourself:

Sought-after beams of sunshine,
I am sometimes used to find.
But had Oedipus taken me by the hand,
He would have had other green groves in mind.

Queen Lovisa, who was extremely fond of Ulriksdal, liked to take sledding trips there as soon as the weather permitted. One winter's day, she is said to have heard a passer-by saying "She's out there in all weathers", leading to her daughter Princess Lovisa giving her a warm blanket in 1869 with the verse:

To Ulriksdal in cold and snow
A longing draws her hither;
When, in the springtime thaw,
It barely bears her thither.

On Christmas Eve, dinner consisted of lye fish and rice porridge since, according to an old Swedish tradition, people were not supposed to break their Christmas fast and eat meat until Christmas day, when the Christmas ham and kale were served. However, this tradition was not observed strictly, as Christmas Eve dinner in 1867 for example consisted of turkey, 'small birds', caviar and sausage. Sago soup was served for dessert, with juice and cinnamon.

The royal family liked to sing. Prince Gustaf, the Song Prince, had already written his own Christmas song in 1846 which was performed frequently. King Karl XV liked to take part in the singing, although perhaps not to everyone else's delight – his singing teacher is said to have described his voice as "a strong, but not entirely tuneful, bass".

One year, King Karl XV was appointed stair sweeper, much to the delight and amusement of the others.

The Bean King and Queen

Karl enjoyed ice skating at Kastellholmen between Christmas and New Year, and founded a skating club here in 1862. Skating was not seen as an appropriate activity for women, but Queen Lovisa took part in sledging.

The last big celebration took place on Twelfth Night, when the royal family hosted a party. The highlight involved appointing that year's Bean King and Queen. A couple of white beans had been baked into the dessert cake, and those who found the beans were the king and queen for the evening. They were crowned with paper crowns and decided what would happen for the rest of the evening. One task was to appoint members of their court and assign work duties. One year, King Karl XV was appointed stair sweeper, much to the delight and amusement of the others. 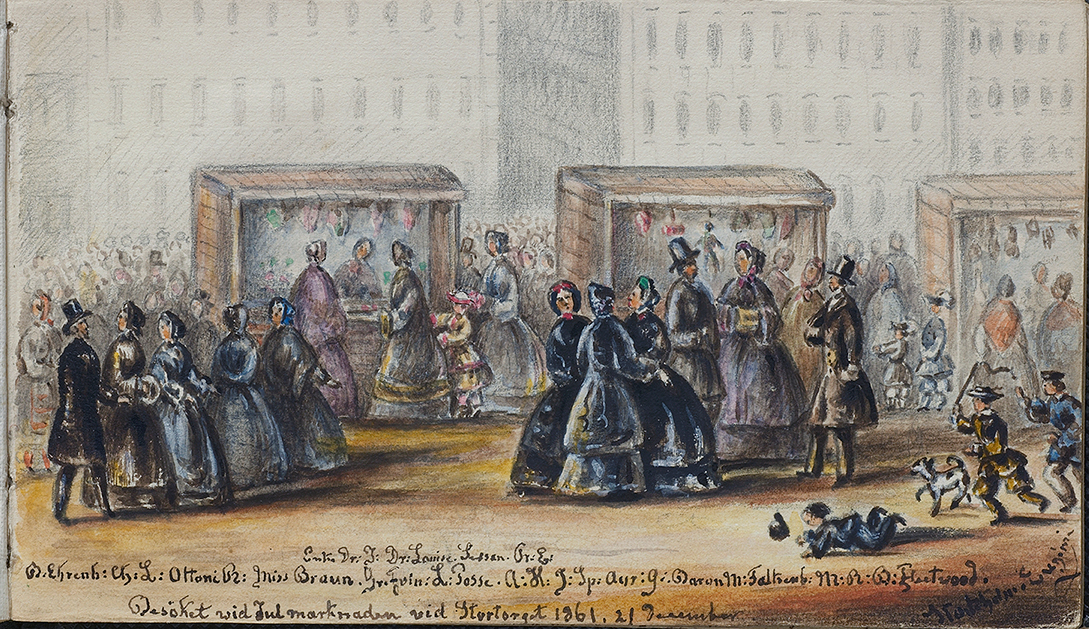 A visit to the Stortorget Christmas market on 21 December 1861. (Watercolour by Princess Eugénie.) From the archive of the Bernadotte Library. 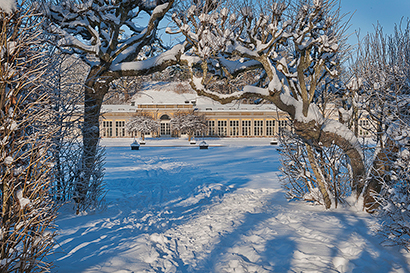 Ulriksdal Palace Park. Queen Lovisa was extremely fond of Ulriksdal and liked to take sledding trips there as soon as the weather permitted. Photo: Håkan Lind 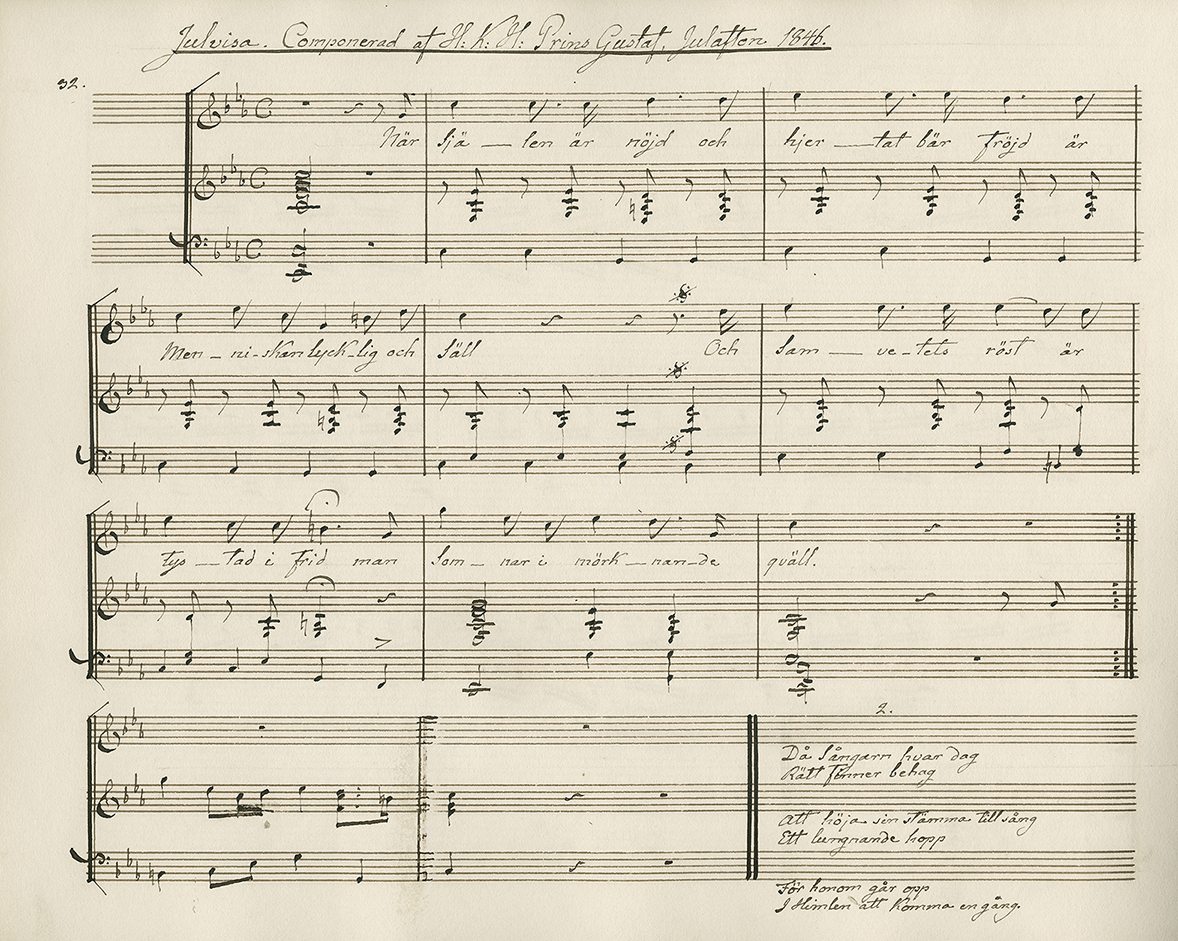 Prince Gustaf's Christmas song, from 1846. The prince was nicknamed the Song Prince, and became well-known as a composer under the pseudonym G*****. More than 50 of his compositions have been preserved. From the archive of the Bernadotte Library. 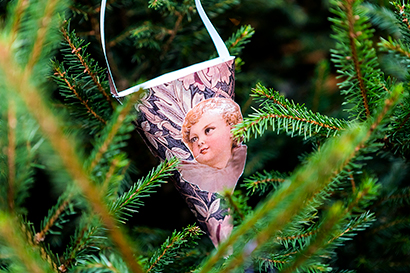 The tradition of bringing in and decorating a tree was established during the reign of King Karl XV in the mid-19th century. Photo: Orlando 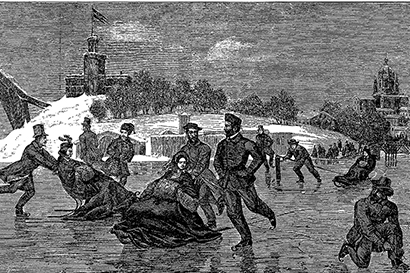 Ice skating at Kastellholmen was a popular form of entertainment between Christmas and New Year. Skating was not seen as an appropriate activity for women, but Queen Lovisa took part in sledging. King Karl XV can be seen in the centre, and it is probably Prince August who is pushing the queen's sledge. Drawing by G.V. Palm, from an 1862 issue of Illustrerad Tidning. 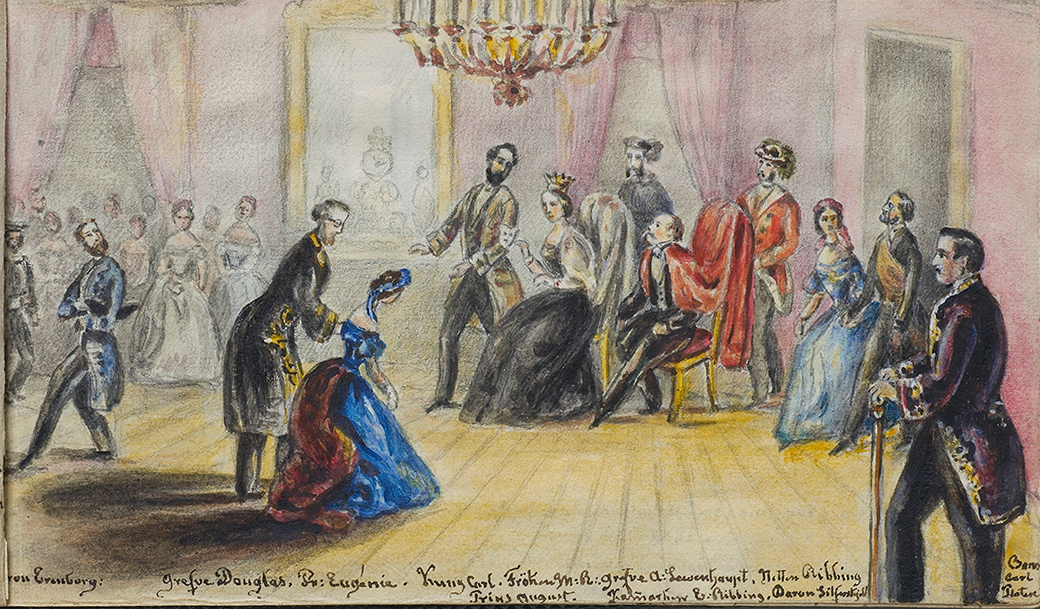 "Twelfth Night, 5 January 1862. Stockholm Palace. Queen Louise's salon. The bean celebrations take place from half past eight to half past nine in the evening. There was general curtseying and bowing for the Bean King and Queen, before the lively dancing began." Watercolour, signed by Princess Eugénie. From the archive of the Bernadotte Library.