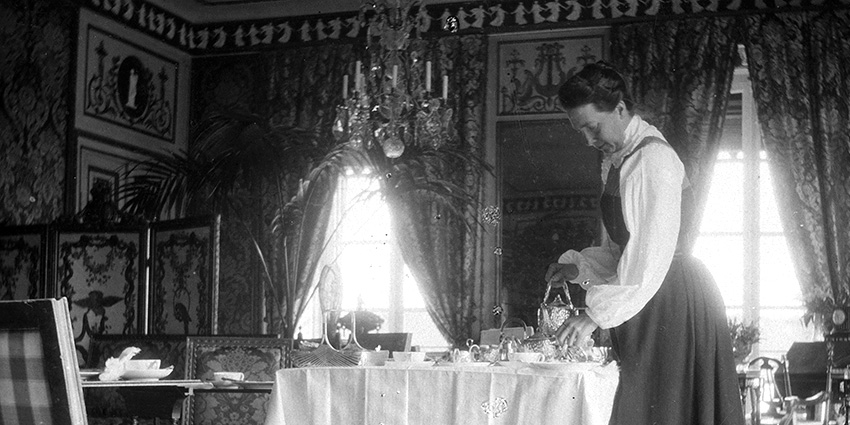 Queen Victoria (1862–1930) enjoyed baking. Her own cookbooks, which are preserved in the Bernadotte Library, include recipes that the queen herself noted as her favourites.

Here is the recipe for Queen Victoria's 'name day wreath':

Pour the flour into a well warmed porcelain dish. Save a little for shaping the dough. Whisk the egg and the sugar until fluffy. Dissolve the yeast in a little of the warm milk. Combine with the rest of the milk, and add the cardamom, salt and cinnamon. Pour the milk into the egg mixture and gradually stir in the flour. Knead the dough until it is smooth. Beat the butter until it is soft and pale, and then add it. Leave the dough to rise under a cloth at room temperature.

Once the dough has risen well, place it onto a floured board and knead it again before rolling it into a thin rectangle.

Grease the dough with softened or melted butter, and sprinkle over the sugar, the chopped almonds and the quickly parboiled and cooled currants. Roll up the dough into a long cylinder. Lay it on a greased baking tray in the shape of an elongated ring. Use scissors to cut 3 cm thick leaf-like flaps, and fold them in turn in each direction. Leave the dough to rise again on the greased baking tray. Then brush with a whisked egg yolk and sprinkle over the chopped almonds, nib sugar and a little cinnamon. Back at 200℃ for approximately 45 minutes or until the bread is baked through and a beautiful golden brown colour. Leave to cool a little on a baking tray before placing the wreath on a rack to cool fully.

This recipe is taken from the book 'Kunglig Taffel – till bords med Bernadotterna' (1986) by Inger Grimlund and Christine Samuelson.

Top image: Queen Victoria in the Red Drawing Room at Tullgarn Palace, from the private photo album 'Tullgarn' from the Bernadotte Library's collection. The album was a given to Queen Victoria by King Gustav VI Adolf for Christmas 1901. 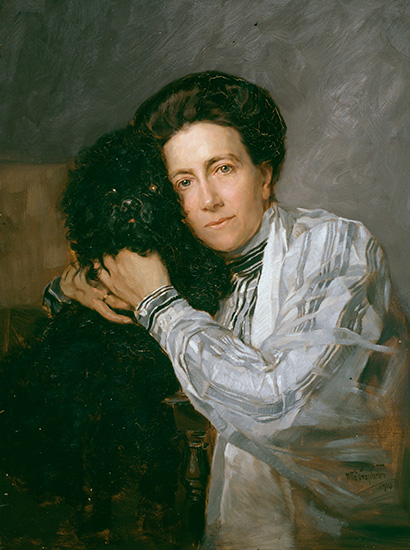 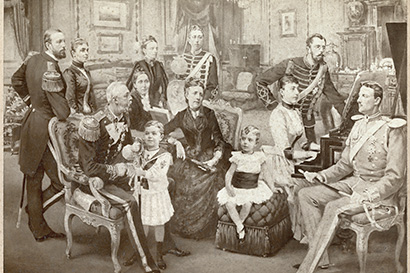 The Royal Family in 1888. Seated, from left: King Oskar II with Prince Gustaf Adolf (VI), Queen Sofia, Prince Wilhelm and Prince Karl. Standing, from left: Prince Oskar and Ebba, Princess Teresia, widow of Prince August (Oskar II's brother). Sitting in front of her with a book in her hand is Princess Eugenie (Oskar II's sister). At the back is Prince Eugen. To the side are Crown Prince Gustaf (V) and Crown Princess Victoria. Photo: From the Royal Collections/Royalpalaces.se

Find out more about Tullgarn Palace

Find out more about the Palace Park