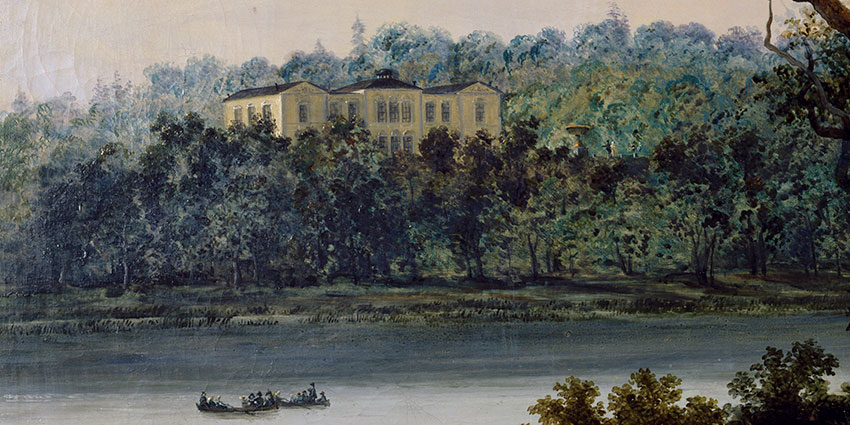 The pink furnishings and décor of the summer palace are largely made from Swedish materials, including marble from Kolmården and porphyry from Älvdalen. It was King Karl XIV Johan – the first Bernadotte – who spent the most time here. Staying at Rosendal Palace was a way of escaping from city life and the formalities of the court.

A summer palace on Djurgården

One of the most attractive, most elegant summer palaces I have ever seen," wrote the Danish writer Christian Molbech about his visit to Rosendal in the early 1840s. To this day, Rosendal continues to attract both Swedish and overseas visitors with its beauty.

In 1817, when Karl Johan was still crown prince, he bought Rosendal, a small country house hidden away on Djurgården on the southern shore of Djurgårdsbrunn Bay. It is easy to see why he chose this particular property. This is a beautiful location, with its reflective water and its lush green meadows, located close to the city and to the training ground on Ladugårdsgärde, where he was often involved in military exercises in June and July. To make it easier to cross between Rosendal and Ladugårdsgärde, a pontoon bridge was eventually erected across the bay.

Immediately after purchasing the property, the crown prince began converting the unassuming 1790s main building into a place for rest and recreating. The farmland was transformed into a park with new roads and winding paths leading through varied natural scenery. However, the improvements did not stop with Rosendal. After Karl Johan became King of Sweden in 1818, the whole of Djurgården was enhanced with improved roads, paths, bridges, planting and seating. In 1833, the Djurgårdsbrunn Canal was completed and shady avenues of trees were planted along the banks.

While the tiled stove in the king's bedchamber was being lit on Sunday 21 March 1819, a fire broke out which completely destroyed the main building. Only the stone foundations remained. Just over a week after the fire, the diarist Märta Helena Reenstierna – the Årsta lady – visited Rosendal and described in her diary how many soldiers were working hard to clear the ruins. One of the officers told her that they would start constructing a stone building immediately, and that it would be finished after the summer. However, this turned out not to be the case.

It was not until 1827 that the new Rosendal would be completed, and it would then be built of rendered, plastered wood. It was also prefabricated and moveable. This unique design was created by the architect Fredrik Blom. Many domestic materials were used. For example, the columns supporting the balcony on the south side of the palace were made of marble from Kolmården, and the ornamental urn north of the palace was made of porphyry from Älvdalen. The furnishings and other interior details were also largely made in Sweden.

Many Swedish and foreign visitors who came to Rosendal were struck by its simplicity. Xavier Marmier came in 1840, and described the building as:

"A simple home, but graceful and tasteful, and more like a villa for a nobleman than a royal palace." On 1 April 1825, it was described in the Granskaren newspaper as follows: "This little castle is one of the most elegant palaces of modern times."

Rosendal was used regularly by King Karl XIV Johan and his family. However, as a general rule they did not stay here overnight – they came during the daytime to briefly escape city life and the formality of the Royal Palace of Stockholm. This was a place for family life, as well as for banquets and parties. Some of the parties were of a public nature. For example, the celebrations of Crown Princess Josefina's name day on 21 August were a regular public event for several years, attracting such large crowds that newspaper correspondents began to complain about jostling, shoving and trampling. The Josefina Day celebrations were then moved to Drottningholm.

The spectator dinners that took place here were also well known – a tradition adopted by King Karl XIV Johan. On Midsummer Day in 1821, Märta Helena Reenstierna came to Rosendal and wrote in her diary that, from a distance, she could see:

"… an almost innumerable number of people who surrounded the Pavilion while the King ate."

The pavilion described by the Årsta lady was the Lower Pavilion at Rosendal, which was used while waiting for a new pavilion to be completed. Once the new dining pavilion was ready in 1826, the public were able to get an even better view. Even during the time of King Oskar I, coming to Rosendal to see the royal family eat at close quarters was a popular pastime. An Irish travel writer, Selina Bunbury, described in the 1840s with a sense of wonder how King Oskar, the queen, the queen dowager, the princess and the princes ate their dinner in front of hundreds of spectators, who stood still and watched them in silence.

Rosendal was used frequently until 1844, when King Karl XIV Johan died. His son, King Oskar I, spent a lot of time at Haga and his visits to Rosendal became fewer and fewer. However, when the summer palace was used it came to life once more as depicted in a colourful drawing by Princess Eugenie from 1849, in which she drew herself and three friends in the Blue and Yellow Cabinet. Her friends are dancing, while Eugenie – who had difficulties walking – sits and juggles with balls. When King Oskar I died in 1859, Rosendal was inherited by his wife Josefina who only came here for brief visits. An article in the Illustrerad Tidning newspaper in May 1862 describes an abandoned summer palace that has ceased to be a living place of summer entertainment and has already become a monument to King Karl XIV Johan.

The end of the union with Norway

When King Oskar II inherited Rosendal on the death of Queen Dowager Josefina in 1876, he began to renovate the building which had been left largely untouched since the time of King Karl XIV Johan. Rosendal now came to be used more often. It was also here that the king came during the revolutionary days of early June 1905, when the union with Norway was dissolving. On 7 June, King Oskar II received a message from the parliament in Kristiania (now Oslo) stating that the union with Sweden had come to an end. In a letter of thanks to Sweden on 14 June, he wrote that the break with Norway had caused his heart to suffer:

on 14 June, he wrote that the break with Norway had caused his heart to suffer:"a deep, unhealable wound."

The next day, nearly ten thousand people came to Rosendal to show their support for the king.

The birth of a museum

With the death of King Oskar II in 1907, Rosendal ceased to be a summer palace. Instead, his son Prince Eugen and Director of the Royal Collections John Böttiger decided to turn Rosendal into a museum. Rosendal has been open to the public since 1913. 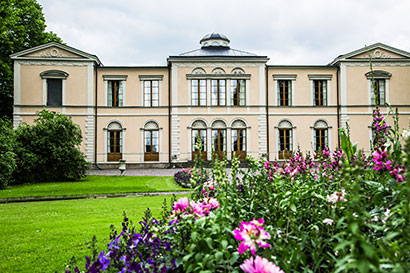 Karl Johan bought Rosendal in 1817 when he was still crown prince. The idea was that the palace should be a country house hidden away on Djurgården. Photo: Raphael Stecksén 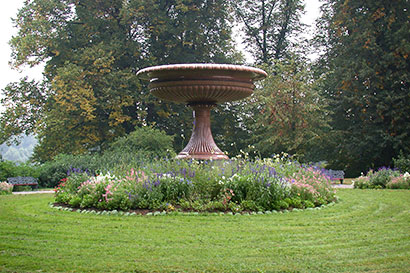 Porphyry urn in the garden on the waterfront side. Like many other elements of Rosendal, it is made from Swedish materials – in this case, porphyry from Älvdalen. Photo: Alexis Daflos 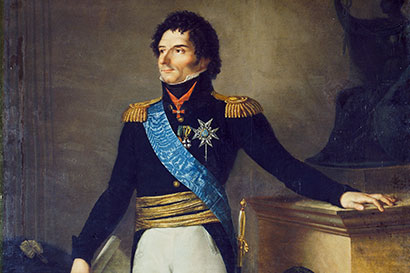 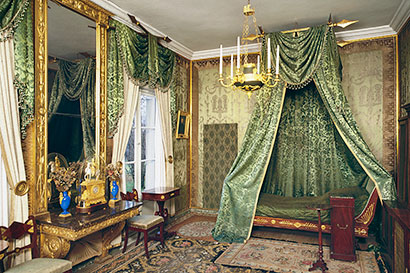 Karl XIV Johan's bedchamber. While the tiled stove in the king's bedchamber was being lit on Sunday 21 March 1819, a fire broke out which completely destroyed the main building. Photo: Håkan Lind 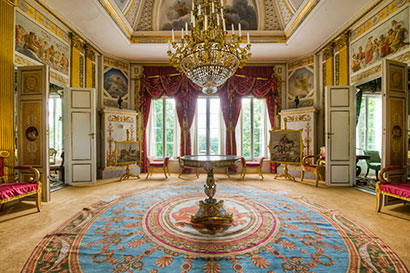 The Lantern Room. Rosendal's décor is a unique record of the European Empire style, also known in Sweden as the Karl Johan style. Photo: Gomer Swahn 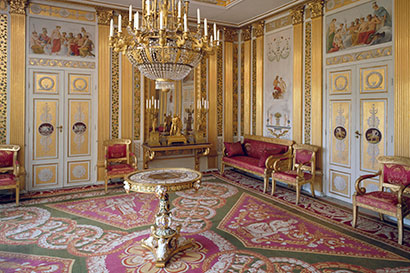 The Red Salon, pictured before its restoration in 1979-1985. The Empire style can be seen in the mahogany furniture, the wall-to-wall carpets and the bright colours. Photo: Håkan Lind 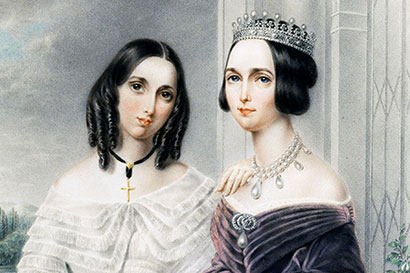 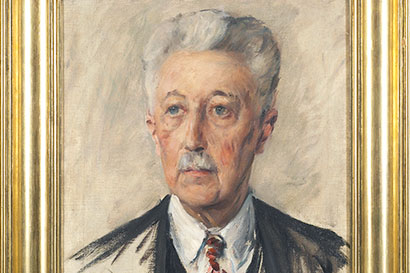 After 1907, Prince Eugen and Director John Böttiger turned Rosendal into a museum. The palace has been open to the public since 1913. Photo: Alexis Daflos

Advance bookings are recommended for larger groups. Rosendal Palace can be booked June–August.

The palace remains largely unchanged since the time of King Karl Johan and King Oskar, making Rosendal Palace a unique record of the Euro...

Explore the buildings at Rosendal that King Karl XIV Johan had built in the 19th century. Rosendal has signs detailing the history of the...

Rosendal Palace was built on southern Djurgården in 1823-27 for King Karl XIV Johan . Fredrik Blom, one of the leading architects of th...

The Sèvres table at Rosendal Palace

In the middle of Rosendal Palace's main state room, the Lantern Room, stands a very special table. It was a gift from the King of France,...

The strong contrasts and colour palette of the Empire style, its military symbolism and its expensive materials reflect European tastes d...