Crown Princess Victoria was the first of The King and Queen's three children to get married. The year was 2010. It was a big event. Not only was this Sweden's first royal wedding since 1976, it was also an heir to the throne who was getting married.

On 19 June, just like so many other royal brides before her, The Crown Princess and her husband Mr Daniel Westling were married at Stockholm Cathedral. The couple got to know each other in 2001.

... there is nothing greater than love

The wedding was broadcast live by Sveriges Television, who described it as the biggest event ever to have been watched on TV in Stockholm. Victoria was not the only one to be moved to tears by Prince Daniel's speech, which ended with him turning to Victoria and saying:

"Dearest Victoria, I am so proud of what we have together. I am proud to be your man, and I will do everything to ensure that you remain happy. Victoria, there is nothing greater than love. I love you so much."

The bride wore a dress created and sewn by designer Pär Engsheden. The dress is made from pearl-white, double-sided duchess silk satin, and has short arms and a deep boat neckline which leaves the shoulders bare, edged by a turned-out collar. The V-back dress features a train that is almost five metres long, attached to both the dress and a broad sash at the waist with covered buttons. The workmanship is exquisite, and with its clean lines and its modern yet timeless look, it is exactly what a royal wedding dress should be.

Just like The Queen, The Crown Princess wore the cameo tiara together with Queen Sofia's lace veil. Naturally, the traditional sprig of myrtle was also present in both her hair arrangement and the bridal bouquet.

Both The King and Queen's and The Crown Princess Couple's weddings were preceded by a banquet on the evening before the ceremony – held at the Royal Swedish Opera and Stockholm Concert Hall respectively – hosted by the Riksdag and the Swedish Government. On the evening before her wedding, Victoria wore an asymmetrical dress in powder-pink lace with hand-stitched sequins and pearls. This dress was also on show in the exhibition. In the image below, the evening dress worn by Princess Madeleine on the night before her wedding (both designed by Elie Saab from Lebanon) can also be seen. 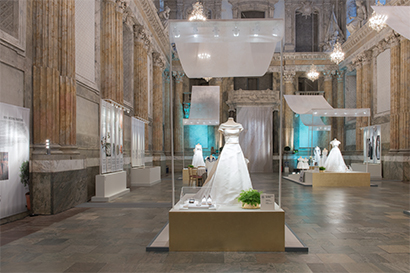 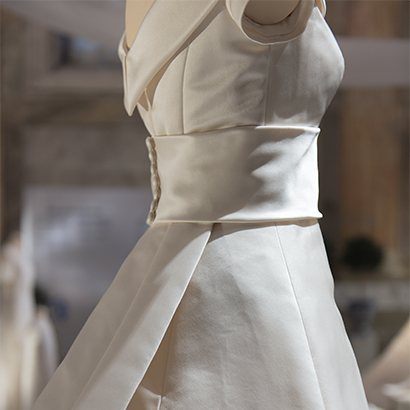 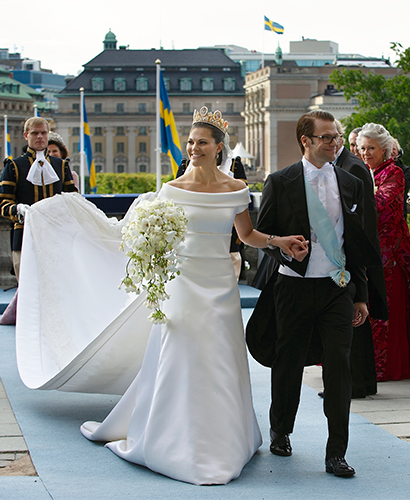 Images: The Crown Princess Couple on Lejonbacken, being congratulated by the public. Photo: Alexis Daflos/Royalpalaces.se. Other photos: Sanna Argus Tirén/Royalpalaces.se 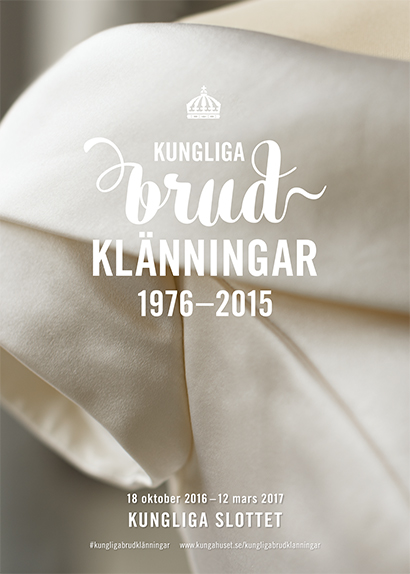 You can see The Crown Princess's dress and accessories in the slideshow below. You can zoom in and enlarge the images via the symbols. It may take a moment for the images to load.