Visiting Rosersberg Palace is like stepping back into an authentic royal environment from the turn of the 19th century. The fittings have remained untouched since 1860.

A visit to Rosersberg Palace means taking a step back into an authentic royal milieu from the turn of the 19th century. The permanent interiors have been untouched since 1860.

In the 1760s the palace became a royal palace when Duke Karl (XIII) moved in and modernized the palace in late Gustavian style.

The modernization was lead by the architect Jean Erik Rehn and an important series of new interiors were introduced, typified by the Orange and Red drawing rooms.

Karl XIV Johan and Queen Desideria, the first Bernadottes, were the last royalties to reside at the palace. Karl Johan's bedchamber is one of Sweden's finest examples of an interior from the early 1800s.

Read more about the history of Rosersberg Palace 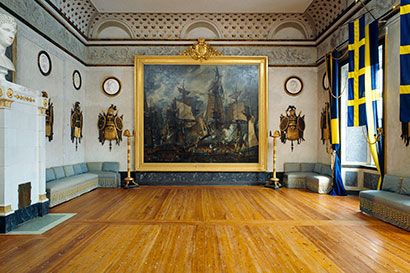 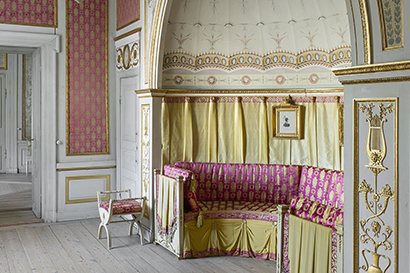 Visiting Rosersberg Palace is like stepping back into an authentic royal environment from the turn of the 19th century. The fittings have...

The palace chapel at Rosersberg Palace is located in the southeast wing of the building, and is particularly rich in history. The chapel ...

West of the palace, towards Sigtuna Bay, is the English-style park laid out by Duke Karl (XIII). Other nearby sights include Sweden's lar...

The Juno Wing and the terrace at Rosersberg Palace are home to a summer café serving sandwiches, coffee, pastries, cakes and ice creams.

Rosersberg got its name from the mother of the estate’s founder, Lord High Treasurer Gabriel Bengtsson Oxenstierna. His mother was descen...

A very early copy of the American Declaration of Independence hangs on a wall at Rosersberg Palace. Sweden was the first state outside th...

Read more
A witness of her time: Hedvig Elisabeth Charlotta

Throughout her adult life, Hedvig Elisabeth Charlotta found herself close to the centre of power. First as a duchess and the sister-in-la...